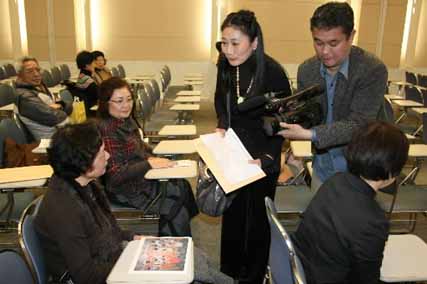 Shizumi Shigeto, 56, a U.S.-based dancer, has visited Hiroshima to discuss the documentary film she is making about an exchange that took place soon after the atomic bombing between students of Honkawa Elementary School and U.S. citizens. On February 17, Ms. Shigeto reported on the current state of the project to alumni of the school, who have offered their support for filming. She will continue to shoot the documentary in Hiroshima and hopes to complete the film in 2011.

The film relates the story of pictures that were sent to the United States by the students of that time, three years after the bombing. These pictures were drawn with art materials provided by U.S. citizens. Ms. Shigeto has shot footage for the documentary since 2006, both in the U.S. and in Japan. While in Hiroshima, she met with Hiroshima Mayor Tadatoshi Akiba and went to Hiroshima Peace Memorial Museum, where she explained her plans for filming to about 50 people, including alumni of the school and other citizens. She also interviewed some of the alumni there and showed a three-minute clip depicting the restoration work that was done on the pictures preserved in the United States.

Genji Higashikawa, 71, one of the alumni and the owner of a sushi restaurant, said that he hoped the film would increase awareness of the goodwill showed by citizens from the country which dropped the bomb.