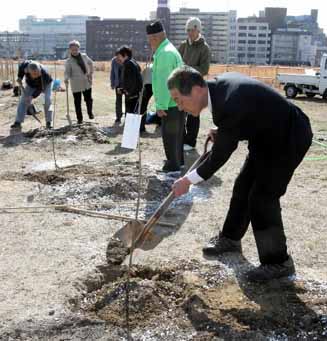 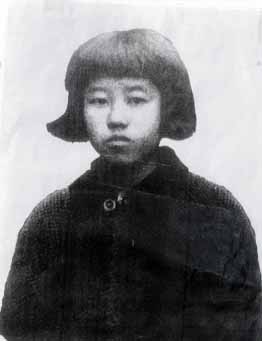 On February 18, the group “Kayoko Cherry Trees Planting Committee,” led by Yasujiro Tanaka, planted three cherry trees in Higashi Ward, Hiroshima City. The trees were planted in remembrance of Kayoko Hayashi, a girl who was killed in the atomic bombing of Nagasaki at the age of 15. Local residents, hoping to “convey the desire for peace of the atomic bomb victims,” took part in the planting.

While working as a student volunteer at Shiroyama National School (now, Shiroyama Elementary School), roughly 500 meters from the hypocenter, Kayoko was killed in the Nagasaki bombing. As she loved flowers, her mother, Tsue, who has since passed away, donated 50 cherry tree saplings to the school to console her daughter’s soul. Six of these trees still blossom with flowers each spring.

In April 2008, to spread Kayoko’s story nationwide, the group began an effort in Nagasaki to pass on “Kayoko’s Cherry Trees.” Seeking to plant trees in Hiroshima, too, they contacted Ryohei Tanabe, who leads a nonprofit organization dedicated to reviving the cherry trees along an avenue in the Futabanosato District. The cherry trees there had been burned down in the atomic bombing of Hiroshima.

Thirty people gathered for the planting, covering the roots with soil and watering them. Mr. Tanabe, 74, remarked, “Planting these cherry trees in both A-bombed cities is deeply meaningful. I hope they will be cared for well.” Added Mr. Tanabe, 66: “And Nagasaki and Hiroshima are just the start. We will continue this activity nationwide, passing on the victims’ desire for peace to future generations.”