Group from Sri Lanka sees Hiroshima as model for reconstruction 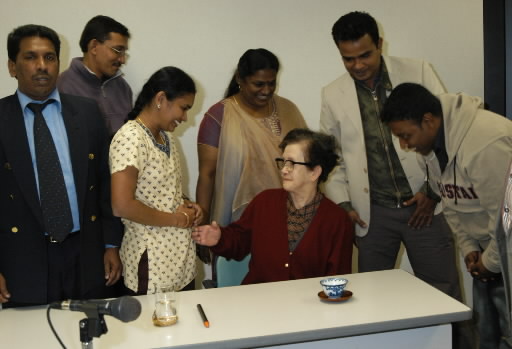 On February 22, nine local administrators and journalists from Sri Lanka visited Hiroshima Peace Memorial Park. The members of the delegation are playing a key role in rebuilding eastern Sri Lanka after the ruin of civil war due to ethnic conflict. By listening to the account of an atomic bomb survivor and touring Hiroshima Peace Memorial Museum, they learned how the citizens of Hiroshima were able to revive the city from the devastation of the atomic bombing.

The Sri Lankans range in age from their 20s to 40s and are a mix of men and women, ethnic groups, and religions. They came to Japan on February 17, invited by the Ministry of Foreign Affairs of Japan (MOFA), and were eager to visit Hiroshima to learn firsthand about the recovery of the city, the symbol of Japan’s reconstruction.

In a meeting with A-bomb survivor Shizuko Abe, 82, they listened to her account of being exposed to the blast about 1.5 kilometers from the hypocenter while engaged in the dismantling of houses to create a fire lane as well as suffering from keloids after the war. They asked Ms. Abe if she felt bitterness toward the U.S. and if she had faced discrimination. Afterwards, the group spent about 90 minutes in the museum.

In Sri Lanka, government forces and opposing militias have fought a civil war for the past 20 years because of the conflict between the majority Sinhalese and the minority Tamils. Until a ceasefire in 2002, the war had resulted in about 70,000 deaths on both sides.

The current task in Sri Lanka is the stabilization and development of the eastern part of the country, which had been controlled by anti-government forces. In this connection, MOFA launched a project in 2004 to help promote peace, inviting those who are involved in the peace building process to visit Japan. This is the fourth delegation from Sri Lanka since the project’s inception.

Badoordeen Mohamed Murshideen, 42, a journalist, reaffirmed his determination to rebuild his country, saying, “I was impressed by Ms. Abe’s message. At the same time the atomic bombing must be remembered, she doesn’t hold bitterness toward the United States. The experience of the survivors and the reconstruction of Hiroshima are a lesson for bringing peace to the world. I hope to make the most of my visit, by gathering material for my work and for the peace movement in Sri Lanka, so the enmity still felt in my country can be dispelled.”