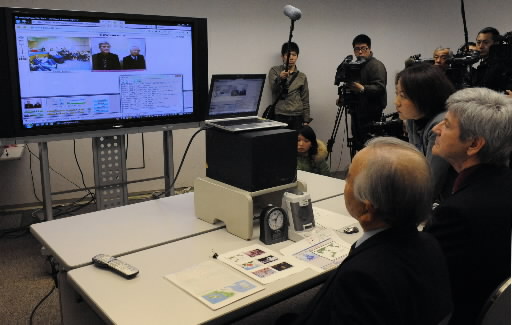 For the first time, the city of Hiroshima has provided testimony by an A-bomb survivor (hibakusha) via a video conferencing system, connecting Hiroshima with an A-bomb exhibition site in the U.S. on February 24. This new approach to delivering testimony is part of the city’s project of holding A-bomb exhibitions in the U.S. nationwide. Video conferencing will be fully utilized starting this April in order to disseminate Hiroshima’s desire for the abolition of nuclear weapons.

Takashi Teramoto, 74, who experienced the atomic bombing while at his house, about 1 kilometer from the hypocenter, shared his account of the devastation with an audience gathered at Indiana University-Purdue University Indianapolis in the state of Indiana, where an A-bomb exhibition is currently underway. Mr. Teramoto, sitting in front of a TV screen at Hiroshima Peace Memorial Museum, spoke of the horrific destruction wrought by the bombing and responded to questions posed by American students. Steven Leeper, chairman of the Hiroshima Peace Culture Foundation, served as interpreter.

A-bomb exhibitions in the U.S. were launched by the city in September 2007. These exhibitions have already been held in 113 cities in 48 states and the District of Columbia (Washington D.C.) and a total of ten hibakusha from Hiroshima and five more residing in the U.S. have shared their experiences during these events. Mr. Teramoto was dispatched to several exhibitions last year.

During the new fiscal year starting in April, exhibitions in another 25 cities are scheduled to take place. When the city is unable to accommodate a request to send hibakusha to exhibition sites due to such concerns as the travel burden aging survivors may face, city officials will turn to the video conferencing system.

Mr. Teramoto found the system very successful, remarking, “I can communicate with the audience the same way I did when I visited the U.S.”