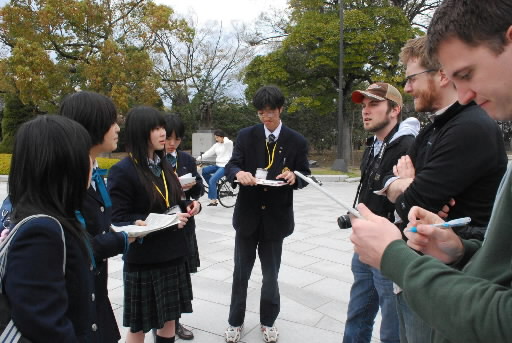 On March 28, students of Hiroshima Jogakuin Junior and Senior High School and Eishin Gakuen, located in the city of Fukuyama, began collecting signatures in Hiroshima Peace Memorial Park for a petition appealing for the abolition of nuclear weapons. The roots of this effort go back to a Peace Summit held by the two schools in Hiroshima and Fukuyama in March 2008. The students hope to gather more than 40,000 signatures, the number collected last year. The signatures will then be delivered to the United Nations Headquarters in New York.

Before the 35 students started their signature drive, they visited Hiroshima National Peace Memorial Hall for the Atomic Bomb Victims, located in the park, to learn about the history of Hiroshima as a military town and the current state of nuclear weapons in the world. After offering a silent prayer in front of the Cenotaph for the A-bomb Victims, the students broke up into groups of three to five and began asking tourists in the park to add their signatures. The schools will also seek the cooperation of other private schools nationwide in this effort.

Of the 40,000 signatures gathered in 2008, 26,000 were delivered to UN Headquarters by Hiroshima Mayor Tadatoshi Akiba. Ayako Maruhashi, 17, a student at Hiroshima Jogakuin Senior High School, also collected signatures last year. She remarked, “We were able to collect a large number of signatures last year and I felt that people, even if they don’t speak out, are hoping that nuclear weapons can be abolished. So we’re taking some initiative.”