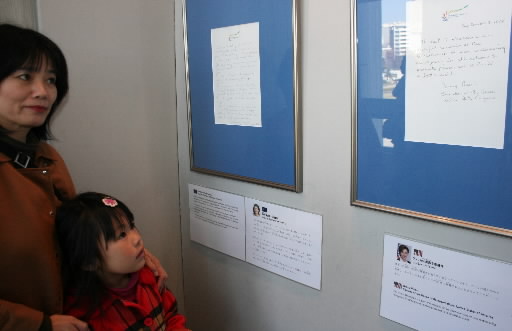 Handwritten messages made by the speakers who took part in the G8 Summit of Lower House Speakers held in Hiroshima last September are on display in the lobby of the main building of Hiroshima Peace Memorial Museum. The exhibit will continue until August 31, 2009.

In the messages they wrote while in Hiroshima, the nine speakers offered their appreciation for the warm welcome extended by the citizens of Hiroshima, shared their impressions of Peace Memorial Museum, and expressed their determination to work for the elimination of nuclear weapons, among other comments.

Boris Gryzlov, Speaker of the State Duma of Russia, wrote, “It is clear that the international community should promote common efforts to stop the proliferation of nuclear and other weapons of mass destruction as well as for a consistent and wide-scale reduction of these arsenals.”

A staff member of the museum commented that each message conveys the speakers’ honest wish for peace. The museum plans to create replicas of the messages and will continue to display these after August 31.