U.S. veteran of W.W. II strengthens his desire for nuclear abolition in Hiroshima 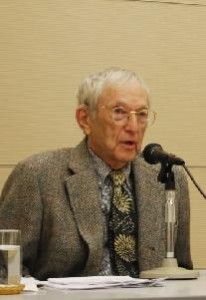 Al Zelver, 88, a U.S. veteran of World War II who lives in the state of Montana, spoke at Hiroshima Peace Memorial Museum on March 26. Mr. Zelver shared his candid feelings of seeing Hiroshima from an airplane two months after the atomic bombing. He added that hearing the testimony of an A-bomb survivor in the U.S. had strengthened his desire for the abolition of nuclear weapons.

“The image of the A-bomb Dome from that time is still vivid in my mind,” he said. Mr. Zelver, then a U.S. Army intelligence officer specializing in Japanese, flew over Hiroshima on his way to Tokyo from Shanghai around October 1945. The airplane circled over the city twice.

“I believe that was because of the curiosity of the pilot,” he explained. “He wanted to see Hiroshima after the atomic bomb was dropped. Everyone on the plane was feeling happy because we believed the bomb had ended the war.” But after they saw Hiroshima, he said, no one on the airplane spoke until they arrived in Tokyo.

Last September he visited an A-bomb exhibition held in Bozeman, Montana, sponsored by the city of Hiroshima, to learn what really happened in Hiroshima. At the event he heard Shigeko Sasamori, an A-bomb survivor residing in the U.S., speak calmly about her experience of the bombing.

“I was deeply impressed with her talk,” Mr. Zelver said. “If only there was enough political will, nuclear weapons could be abolished.” Inspired by his experience of the exhibition in Montana, he decided to visit Hiroshima. “Political leaders and military leaders from all the nations of the world should come to Hiroshima and visit Peace Memorial Museum.”