A step toward nuclear disarmament: Focus on the scale of reduction and verification system 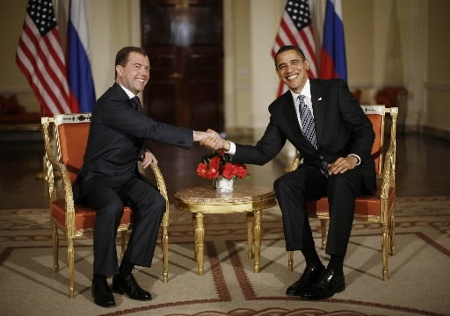 The joint U.S.-Russian statement, released after a meeting of the two presidents, declared that the nations will forge a new treaty involving nuclear weapons by July. The treaty will replace the First Strategic Arms Reduction Treaty (START I), set to expire by the end of this year. The fact that the two nuclear superpowers have given top priority to nuclear disarmament in order to improve their cool relationship is a very promising development.

The U.S. and Russia have been at odds over the eastward expansion of the North Atlantic Treaty Organization (NATO) and the U.S. Missile Defense (MD) Deployment Plan in Eastern Europe. Reaching swift agreement on establishing a new treaty was thus thought to be difficult. With the quick setting of this objective, momentum for global nuclear disarmament may accelerate.

The numbers of strategic nuclear warheads held by the U.S. and Russia are thought to be between 4,000 and 6,000 respectively. This means the two nations have already achieved the goal set by START I, which obliged them to reduce their nuclear warheads to 6,000. Therefore, one focus of the new treaty is whether it will include a provision to reduce the number of warheads to roughly 1,000 each. Another key point will involve preserving and developing the strict mutual inspection and verification system established under START I in order to fulfill, without fail, the next round of reduction.

The negotiation of the new treaty will offer an ideal opportunity for U.S. President Barack Obama, who has pledged to “work toward a world without nuclear weapons,” to prove himself as a man of action. At the same time, it will enable Russia, inferior to the U.S. in delivery systems, like missiles, as well as conventional weapons, to maintain military parity with the U.S.

However, even if the nuclear arsenals are reduced to around 1,000 warheads, a long road remains to nuclear abolition. Today, the world is troubled by the nightmare of terrorists obtaining nuclear weapons. The French government has decided to provide compensation for victims of its nuclear tests. And human beings are now being forced to face the cost of nuclear development.

The two nuclear superpowers, keenly aware of these facts, are expected to pursue negotiations that will lift the state of alert, ensure the no-first-use of nuclear arms, and freeze the development of new types of nuclear weapons. Such negotiations would renew the awareness that nuclear weapons are “unusable weapons” and, in the run-up to the Nuclear Non-proliferation Treaty (NPT) Review Conference next year, strengthen the trend toward nuclear abolition beyond disarmament.