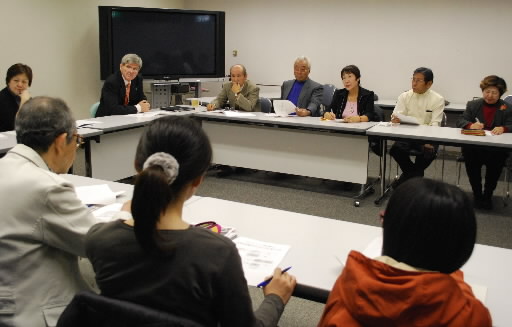 Citizen volunteers in Hiroshima are planning to launch a nationwide campaign to disseminate information about the Hiroshima-Nagasaki Protocol, a measure proposed by Mayors for Peace to abolish nuclear weapons by 2020, by publishing an illustrated book to help Japanese citizens understand the protocol.

About 20 people belong to the volunteer group including representatives of citizens’ groups, A-bomb survivors, university students, and an artist. In preparatory meetings so far, members have agreed to establish the “2020 Vision Campaign Committee” (a tentative name) by the end of April. This committee will become the basis for the group’s activities, with Yoko Nishimura, director of Hiroshima International House, serving as secretary general.

The purpose of publishing an illustrated book is to familiarize people with the protocol and help them understand its difficult terminology. Seitaro Kuroda, a well-known artist, has already agreed to illustrate the book and committee members plan to ask poets and other writers to produce the contents. Once the book is published, the group will hold public readings in various places in Japan.

The volunteer group was initiated at the suggestion of Hiroo Iso, 67, an A-bomb survivor living in Fukuyama City who returned to Japan this past January from the Global Peace Voyage organized by Peace Boat, a Tokyo-based NGO. Mr. Iso encouraged Steven Leeper, chairman of the Hiroshima Peace Culture Foundation, to do something to raise awareness of the Hiroshima-Nagasaki Protocol because this appeal for the abolition of nuclear weapons made by Mayors for Peace is less known in Japan than it is abroad.

The committee will soon establish its administrative base and launch the campaign to publicize the protocol in close cooperation with Mayors for Peace. It will also solicit donations to support its efforts. “We would like as many people as possible to know about the protocol,” said Ms. Nishimura. “And we would like to lobby the Japanese government to take an active role for the abolition of nuclear weapons at such places as the United Nations.”

Hiroshima-Nagasaki Protocol
Proposed to the international community by Mayors for Peace, it is a concrete measure designed to fulfill the “2020 Vision” which aims to abolish all nuclear weapons by the year 2020. One of the protocol’s main pillars is producing a treaty that will ban the possession and use of nuclear weapons and any activity leading to these circumstances. It is hoped that the Hiroshima-Nagasaki Protocol will be adopted at the Nuclear Non-proliferation Treaty (NPT) Review Conference, to be held in 2010.