Anti-war art by Finnish artist on display in Hiroshima 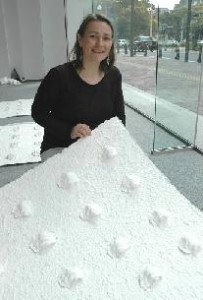 Sade Hiidenkari, 43, a Finnish artist and peace activist, has arrived in Japan for an exhibition of her artwork. On April 2 she installed her piece at the Ebiden Gallery in downtown Hiroshima.

The title of the piece is “Silence.” The mouths of 96 Finnish women are molded with fibrous paper and glued to three sheets of paper, each 1.5 meters long and 1 meter wide. The sheets are hung from the ceiling and can be viewed from the street.

Ms. Hiidenkari explained why all the women’s mouths are closed. “In times of war, women are often forced into silence and refrain from speaking out. I wanted to express these feelings in the A-bombed city of Hiroshima,” she said. She plans to create a similar piece in Hiroshima and display it in Finland.

Last year Rieko Seto, a contemporary artist from Hiroshima, joined a peace forum held in Lovisa, Finland. Impressed with Ms. Hiidenkari’s work, she suggested that the Finnish artist hold an exhibition in Hiroshima.