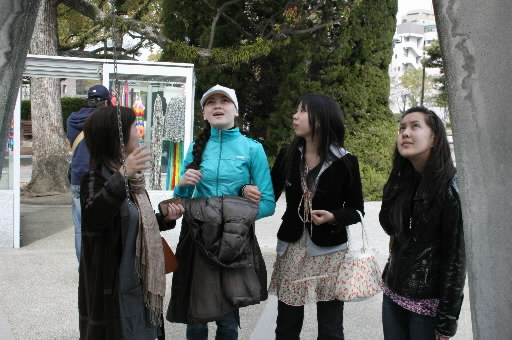 Two students from Kazakhstan visited Hiroshima Peace Memorial Park on April 3. These students were invited by a citizens’ group in Hiroshima to study at Sanyo Girls’ Junior/Senior High School for one year. This group, the Hiroshima Semipalatinsk Project, has been conducting a program for the past ten years in which students from Semipalatinsk, Kazakhstan, a nuclear test site of the former Soviet Union, are invited to study in Hiroshima. The group is also planning to hold an international peace conference in Kazakhstan this August.

The two students are Lyailya Kairkanova, 16, and Malika Kerimbaeva, 14. Chieko Kobatake, 56, deputy director of the Hiroshima Semipalatinsk Project, guided them to the A-bomb Dome and the Children’s Peace Monument. Ms. Kerimbaeva said the sight of the dome was heartbreaking and that such a tragedy should never be repeated.

This year marks the 60th anniversary of the first nuclear test conducted in Semipalatinsk. It is also the 10th anniversary of the program that has brought a total of 14 Kazakh students to Japan to study Japanese and the history of the atomic bombing while attending high school in Hatsukaichi, Hiroshima Prefecture.