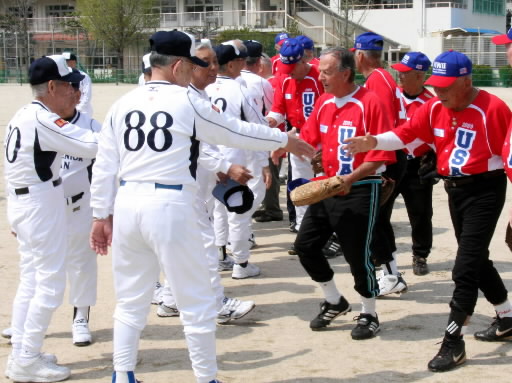 Veterans from the United States and Japan held a “Japan-U.S. Veterans Friendship Softball Game” at Honkawa Elementary School in downtown Hiroshima on April 5. The first friendship game took place in December 2007 near Pearl Harbor in Hawaii, the historical site where the Pacific War began. The game in Hiroshima was the second occasion for such a sporting event and, in the A-bombed city, the participants renewed their pledge to renounce war.

About 20 U.S. veterans joined 30 Japanese veterans from eight prefectures, including Hiroshima Prefecture and Yamaguchi Prefecture. Most of the participants were veterans of World War II and their average age was over 80 years old. Wearing baseball uniforms, they played with enthusiasm and, after the game, put their arms around one another’s shoulders and complimented each other on their fine play.

Carl Reber, 77, who witnessed the attack on Pearl Harbor at the age of ten and said that he hated Japan during the war, remarked, “I again recognized the importance of respectful dialogue.”

On the day before the softball game, the participants visited Hiroshima Peace Memorial Museum and offered prayers for peace at the Cenotaph for the A-bomb Victims.