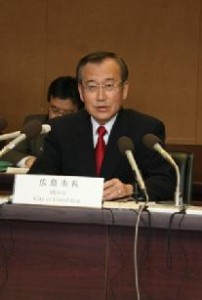 During a press conference held at Hiroshima City Hall on April 6, Mayor Tadatoshi Akiba welcomed the sweeping vision for the abolition of nuclear weapons that U.S. President Barack Obama revealed in a speech in the Czech Republic on April 5. “The fact that President Obama has made clear his determination to realize a nuclear-free world is quite significant,” Mayor Akiba said.

Referring to Mr. Obama’s statement that “as a nuclear power--as the only nuclear power to have used a nuclear weapon--the United States has a moral responsibility to act,” Mayor Akiba judged the pledge positively. “President Obama has clarified the U.S. stance in the 21st century, establishing the recognition of its moral obligation to act for nuclear abolition,” he commented.

In his speech, Mr. Obama called for a “Global Summit on Nuclear Security” to be sponsored by the United States within a year as part of its anti-terrorism efforts. Concerning the appeal from A-bomb survivors that this gathering be held in Hiroshima, Mayor Akiba remarked, “The import of holding such a summit in Hiroshima would be significant. I will share their appeal with the U.S. side.” He expressed his intention to seize every opportunity to pursue this possibility, along with the effort to invite Mr. Obama to visit Hiroshima. He also plans to request a meeting with President Obama when he visits the United States in the future.