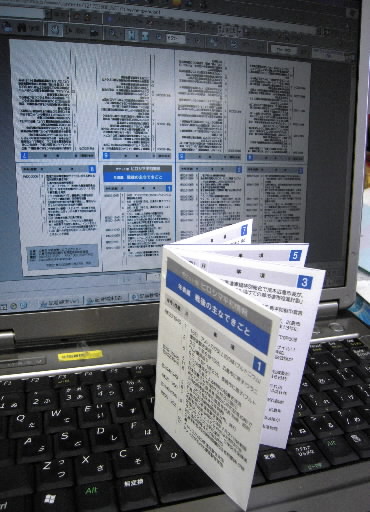 The City of Hiroshima has released a supplement to the “Hiroshima Pocket Peace Guide,” a small booklet published last year with key peace-related information on Hiroshima. The supplement, a “chronology of events after World War II,” provides information on post-war conditions involving nuclear weapons as well as developments in the A-bomb survivors’ movement and anti-nuclear efforts. It consists of eight pages and can be printed out from the City’s website.

The Japanese version of the Hiroshima Pocket Peace Guide, which contains information on A-bomb damage and monuments in Peace Memorial Park, was released in August 2008 to support Hiroshima citizens in guiding visitors around the park. Then, in December, the English version of this booklet was released. In response to requests from the public for further information to share with visitors, the “chronology of events” has been added.

The supplement can be assembled by printing out the information on A4-size paper, then cutting and folding. Though this information is currently available only in Japanese, the City plans to produce other language versions, too. It also intends to create additional supplements on other themes.