48 works of art sent from Hiroshima schoolchildren in 1947 now on display in U.S. 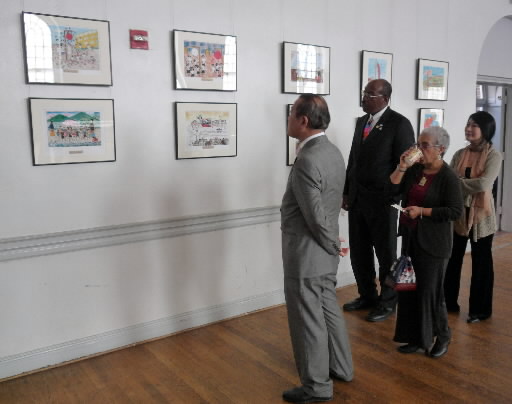 The 48 works of art, created by children attending Honkawa Elementary School at the time, include drawings depicting Hiroshima under reconstruction as well as works of calligraphy. Learning of the shortage of supplies in the A-bombed city, the American minister sent crayons and paints to the school in 1946. The art was sent to the minister from the students to show their appreciation.

Three years ago, Ms. Shigeto, whose parents are from Hiroshima, encountered the artwork at the church where it had been stored, and was deeply moved. Working on the restoration of the artwork in cooperation with the church, she decided to produce the documentary so that the younger generation could learn about the heartfelt exchange between the citizens of the United States and Japan amid difficult times.

To commemorate the completion of the restoration project, the church organized the exhibition with original pieces and some replicas. Roughly 600 people attended the opening ceremony held on April 5 in Washington, D.C. The exhibition at the church will continue until June, followed by a touring exhibition at other churches and schools in the United States. An exhibition is also planned for Japan.

Related articles
Documentary film shares exchange between Japanese students and U.S. citizens after the atomic bombing (Feb. 20, 2009)
48 works of art sent to U.S. 61 years ago to be exhibited in Hiroshima (April 21, 2008)
ツイート
Return