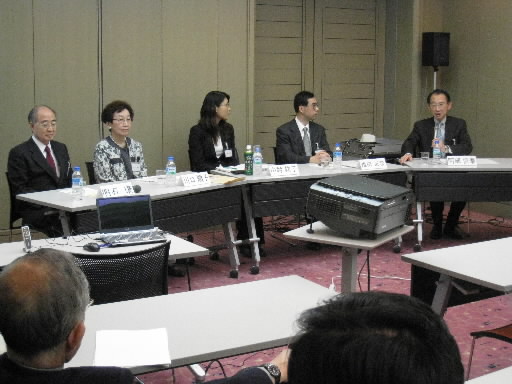 Researchers specializing in nuclear disarmament and nuclear non-proliferation established the Japan Association of Disarmament Studies on April 11. In light of growing momentum for nuclear disarmament, including the advent of the Obama administration in the United States, the group held a symposium in Tokyo to inaugurate its founding and exchange views on the challenges of nuclear abolition.

Yasushi Akashi, one of the panelists at the symposium and the former Undersecretary-General of the United Nations, pointed out, “We can now expect substantial reductions in nuclear warheads. But the path from disarmament to the total elimination of nuclear arsenals will present difficulties.” Yoriko Kawaguchi, co-leader of the International Commission on Nuclear Non-Proliferation and Disarmament (ICNND) and the former Japanese Foreign Minister, stated, “We have not held adequate discussions in Japan on nuclear deterrence theory. It is vital to clarify and prepare arguments against this theory in order to eliminate nuclear weapons.”

Masahiko Asada, professor at the Graduate School of Law, Kyoto University, shared his outlook on the challenges facing the campaign for nuclear disarmament in view of international law, while Keiko Nakamura, the secretary general of Peace Depot, a nonprofit organization, expressed her ideas from the perspective of a citizens’ group.

In the gathering of more than 80 researchers and politicians, others voiced such opinions as “Japan should seek deterrence from the U.S. in the form of conventional weapons, not nuclear weapons” and “Presenting the ICNND reports to senior officials of the nuclear weapon states is vital.”

The Japan Association of Disarmament Studies will promote research and presentation of views regarding the disarmament of weapons of mass destruction and conventional weapons. Mitsuru Kurosawa, professor at Osaka Jogakuin College, was chosen as chairman at the inaugural meeting prior to the symposium. The group also made plans for such activities as holding workshops and publishing newsletters at this meeting.