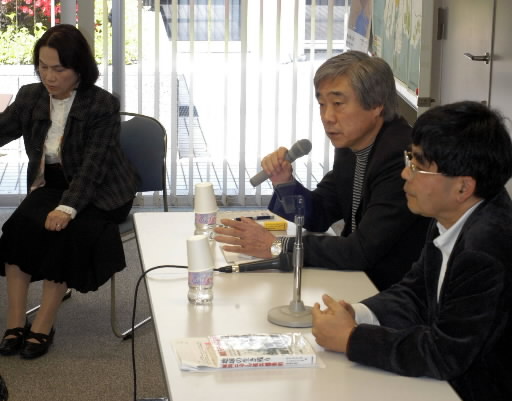 On April 18, the Hiroshima Alliance for Nuclear Weapons Abolition (HANWA), a citizens’ group in Hiroshima, held a public lecture at Hiroshima Peace Memorial Museum. Two lawyers offered explanations of recent moves of the International Commission on Nuclear Non-proliferation and Disarmament (ICNND), a joint initiative by the Japanese and Australian governments.

Kenichi Okubo, secretary general of the Japan Association of Lawyers Against Nuclear Arms, praised U.S. President Barack Obama’s vision for a world without nuclear weapons as a “historic transformation.” He noted that a “nuclear weapons convention” should be implemented in the process of pursuing the elimination of these arms. He also expressed his personal hopes, saying, “It will be difficult to reach an agreement among all nations on nuclear abolition, but we now have Mr. Obama on our side, a strong supporter of nuclear abolition.”

Meanwhile, Masayoshi Naito, a member of the group’s board of directors, criticized ICNND, arguing that “ICNND has several problems to solve, including the fact that it has not called for a ban on the use of nuclear weapons.” At the same time, he stressed: “We need for ICNND to help eliminate nuclear weapons from the world while the A-bomb survivors are still alive.”

About 30 people attended the lecture. ICNND is scheduled to hold its final meeting in October in Hiroshima. Mr. Naito emphasized: “We must convey the A-bomb experiences of Hiroshima at that meeting so it will not turn out to be merely another ceremony.”