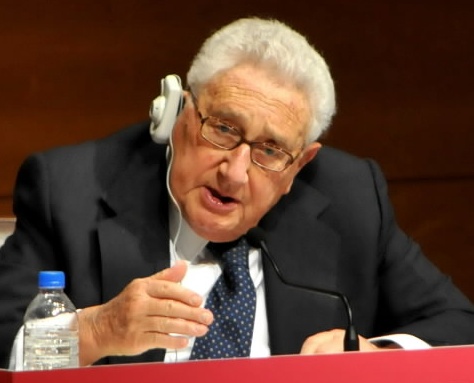 Former U.S. Secretary of State Henry Kissinger, 85, spoke at Okayama University in Okayama City on April 20. He discussed challenges now facing the world, including the proliferation of nuclear weapons, the global financial crisis, and climate change, stressing the importance of Asia and the United States working together to overcome these threats.

Mr. Kissinger, along with three other former top U.S. officials, published joint statements on the peril of nuclear weapons in the Wall Street Journal in January 2007 (“A World Free of Nuclear Weapons”) and January 2008 (“Toward a Nuclear-Free World”). In his speech he spoke on the issue of nuclear proliferation and pointed out that conditions involving nuclear weapons have grown perilous and a global approach to the problem is vital.

Regarding North Korean nuclear development, Mr. Kissinger stated that only the six-party talks can lead to a satisfactory outcome. He emphasized the importance of continuing these talks involving North Korea, Japan, the United States, Russia, South Korea, and China.

Assessing overall global conditions today, he believes the world has entered a time of change and its locus is moving to Asia. In terms of such challenges as the financial crisis, he stressed that nations cannot solve these problems unilaterally and building cooperative relations among Pacific Rim nations, including the United States, is essential.

Taking questions from the floor, Mr. Kissinger shared his view on the present position of the United States, saying that the United States must bear in mind that it is not the world’s sole superpower.

The speech was organized by Okayama University, Okayama Broadcasting Company, and other entities. About 600 people, including some at a separate venue where the address was broadcast, listened to Mr. Kissinger’s speech.