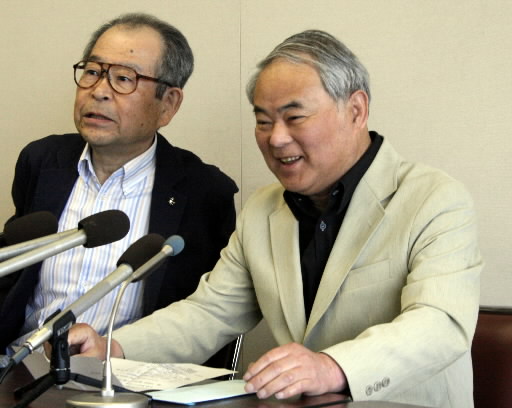 The English translation for volumes nine and ten of the manga series “Barefoot Gen” will be published in July to complete the entire set of ten volumes. “Barefoot Gen” is the story of a boy who survives the atomic bombing of Hiroshima and lives through its aftermath. Manga artist Keiji Nakazawa, 70, now a resident of Saitama Prefecture, near Tokyo, held a press conference at Hiroshima City Hall on April 23, and commented, “I hope that Gen’s message denouncing the madness of war will spread throughout the world.” He intends to provide U.S. President Barack Obama with a set of books.

The “Barefoot Gen” series started its run in June of 1973 in a weekly manga magazine. The book form of the series has been translated into about a dozen languages including Russian, French, and Spanish.

At the press conference, Mr. Nakazawa also said, “A symbol of the story is the growth of wheat, which emerges in winter and grows strongly, even if stepped on. I want to give hope to children who have been exposed to war.”

Work on the English translation for the series had stopped after volume four but then Project Gen, a Kanazawa-based citizens’ group that once translated the series into Russian, decided in 2000 to create a new English translation for all ten volumes. The members of the group had a hard time translating the story, particularly the onomatopoeia used to express the horror of the atomic bombing. Starting with volume one, the English version has been published over the years as the translations were completed.

A publisher in the United States will print 1,500 copies each of volumes nine and ten in July. The books will be sold in several countries including the United States and the United Kingdom. In Japan, copies will be available through Project Gen for 1,400 yen per book.