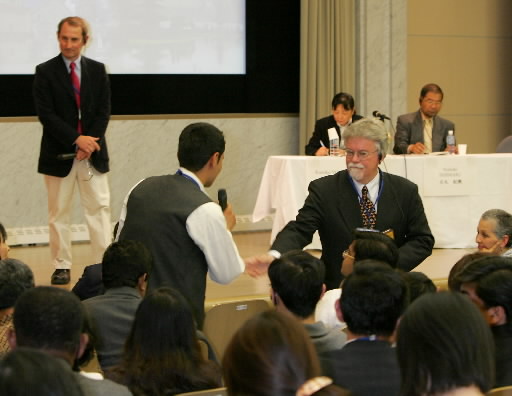 A symposium to ponder the preservation of World Heritage sites in the Hiroshima area, including the A-bomb Dome, was held at Hiroshima Peace Memorial Museum on April 24. The United Nations Institute for Training and Research (UNITAR) Hiroshima Office organized the event to commemorate the 60th anniversary of the enactment of the Hiroshima Peace Memorial City Construction Law. About 75 people including experts from both Japan and abroad as well as citizens participated in the symposium and exchanged views.

Norioki Ishimaru, a professor at Hiroshima International University, explained the history involving the reconstruction of the city and the preservation of the A-bomb Dome. Professor Ishimaru said, “The preservation of the A-bomb Dome was realized through several miracles. The condition of the dome has already undergone such deterioration that it’s difficult to predict what will happen to it in 100 years. Therefore, we must consider what sort of message the A-bombed city of Hiroshima can send to the world on such milestones as the 70th anniversary of the bombing.”

From the floor, a number of suggestions were made. Among them were “even if the A-bomb Dome crumbles someday, it is vital to continue conveying the message of the citizens to the future,” and “what Hiroshima needs is an educational curriculum to ensure that future generations inherit the importance of the World Heritage sites in Hiroshima.”

At the symposium, titled “Building for Peace,” a UNITAR-sponsored international competition that promotes building peace-related facilities in former conflict areas around the world was also presented. Jean-Claude Bolay, a professor of the Swiss Federal Institute of Technology, Lausanne, which is the project’s co-sponsor, spoke of the significance of the program, saying, “We would like to create the kind of space for reflection on peace and reconstruction that Hiroshima now embodies.”