Nuclear weapons can be eliminated: Nuclear-Free Zone conference in Mongolia 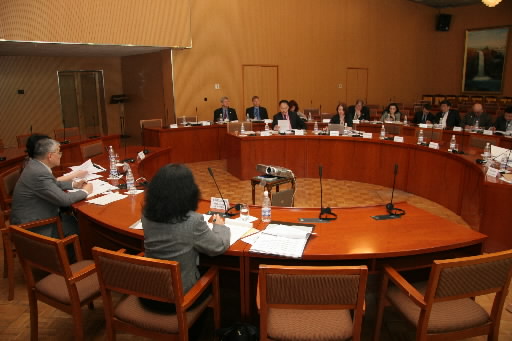 A two-day international conference for delegates from nuclear-weapon-free zones opened on April 27 in Ulaanbaatar, Mongolia. Delegates exchanged views on measures to realize a nuclear-weapons-free world through stronger ties between the nuclear-free zones.

One of the suggestions made at the conference was to adopt the views expressed by the participants into the chairperson’s statement and to present this before the preparatory committee for the Nuclear Non-proliferation Treaty (NPT) Review Conference. The committee is scheduled to gather in New York in May. Another idea involved holding an international conference in New York before the review conference convenes in April 2010, encouraging many nuclear-free-zone countries and the U.N. member countries to participate.

In presentations on current conditions in various areas, the Kyrgyz delegation, representing the member countries of the Central Asian Nuclear-Weapon-Free-Zone Treaty, reported the process of the treaty’s enactment, which came into effect in March this year. Egypt, attending as an observer, advocated a vision for a Middle East Nuclear-Weapon-Free Zone, which would include Israel, a virtual nuclear power, and Iran, an alleged nuclear power. The Egyptian delegates also maintained that the zone should be free of not only nuclear weapons but all weapons of mass destruction.

The conference was sponsored by the government of Mongolia, which has adopted one-state Nuclear-Weapon-Free Zone Status. About 30 delegates from the four zones of Latin America, South East Asia, Central Asia, and South Pacific attended the conference. Africa was absent. Steven Leeper, chairman of the Hiroshima Peace Culture Foundation, attended the conference as an observer. Mr. Leeper explained the 2020 Vision promoted by Mayors for Peace with its view to eliminating nuclear weapons by the year 2020, as well as the Hiroshima-Nagasaki Protocol, which proposes measures to further this cause.

The nuclear-weapon-free-zone (NWFZ) conference held in Ulaanbaatar, Mongolia closed on April 28. The two-day international conference adopted the chairperson’s statement calling for the international community to make efforts toward the expansion of nuclear-weapon-free zones and the realization of a Nuclear Weapons Convention. The statement will be delivered at the Nuclear Non-proliferation Treaty (NPT) Review Conference’s preparatory committee scheduled for May in New York.

The statement included 20 points, including: an international climate to pursue a nuclear-weapons-free world is welcomed; the denuclearization of North East Asia and the Middle East will be supported; and discussion to create a Nuclear Weapons Convention will be advanced. The Egyptian delegation, attending as observers, expressed their disappointment that a clause urging Israel to join the NPT was in the draft document but not adopted for the statement.