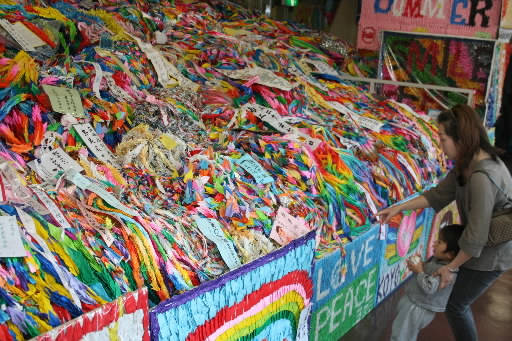 The City of Hiroshima began exhibiting paper cranes at the former Hiroshima Municipal Baseball Stadium in the city center on May 1. About 16 million paper cranes, which had been offered to the Children’s Monument in Hiroshima Peace Memorial Park, are displayed in mounds or hung on the second level of the stadium. The exhibit will run until the end of October, as the city plans to demolish the stadium starting in November.

Of the 16 million cranes, 13 million were offered to the Children’s Peace Monument in fiscal 2008 while another 3 million were folded for the monument in fiscal 2005. The exhibit also presents a variety of other works to the public which were donated to the A-bombed city, such as a crane created of metal that stands two meters high and a chain of 1000 paper cranes folded from a single sheet of paper.

The exhibit includes an area where visitors can learn about the life of Sadako Sasaki, the girl whose death from leukemia due to the atomic bomb’s radiation inspired the raising of the monument. Visitors can also fold their own paper cranes.

The city has stored the cranes offered to the monument since fiscal 2002. For this exhibit, the city is utilizing the former municipal ballpark since the former Bank of Japan building in downtown Hiroshima, which has been used to display the cranes, is now undergoing restoration.

Akiko Katayama, 40, a housewife who visited the exhibit while on a sightseeing trip from Kanazawa City, said, “I was amazed at the immense quantity. The cranes truly convey the enormous scale of people’s wishes for peace.” The exhibit is open from 9 a.m. to 5 p.m. and admission is free.