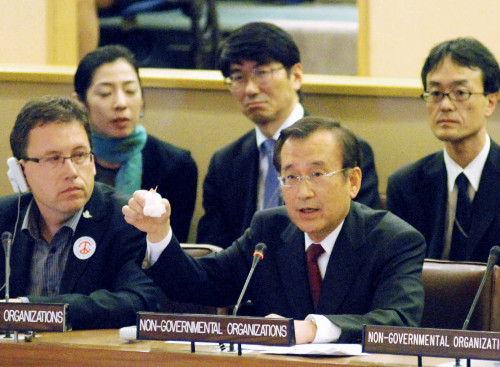 On the afternoon of May 5, the second day of the NPT Preparatory Committee (PrepCom) at U.N. headquarters in New York, representatives from around the world listened to speeches delivered by non-governmental organizations. Hiroshima Mayor Tadatoshi Akiba, who spoke in his capacity as president of Mayors for Peace, fervently called for the elimination of nuclear weapons by the year 2020, based on the wish of A-bomb survivors.

Mayor Akiba pointed out that “a world without nuclear weapons,” as advocated by U.S. President Barack Obama, is also the wish of the majority of cities and people of the world. He coined a word to describe this, the “Obamajority,” and appealed for every nation to take immediate action toward the abolition of nuclear weapons with the public’s support.

While holding a paper crane folded by Sadako Sasaki, a girl who died of leukemia caused by radiation from the atomic bomb, Mayor Akiba concluded his speech by saying, “We should not continue to let children fold paper cranes in despair.”

Nagasaki Mayor Tomihisa Taue also addressed the gathering and called for a Global Summit on Nuclear Security to be held in Nagasaki. President Obama had announced that such an event would be organized within a year.

On the same day, a meeting of Mayors for Peace convened at U.N. headquarters. At the meeting, Emiko Okada, 72, an A-bomb survivor from Hiroshima, shared her A-bomb experience, and her granddaughter, Yuki Tominaga, 11, expressed her wish for peace. The two received warm applause from the world’s mayors who took part in the event.

The change in U.S. nuclear disarmament diplomacy, which U.S. President Barack Obama has advanced, is having a positive impact on the NPT Preparatory Committee (PrepCom) at U.N. headquarters in New York. The word “Obamajority,” coined by Hiroshima Mayor Tadatoshi Akiba, has also surfaced in this atmosphere.

This change in U.S. nuclear posture received the greatest attention in the general discussion that launched the PrepCom, when each NPT member nation addressed the gathering. U.S. representative Rose Gottemoeller delivered a speech on May 5, the second day of the PrepCom, and quoted a part of Mr. Obama’s speech given in Prague in April, in which the president vowed to pursue “a world without nuclear weapons.” Ms. Gottemoeller referred to the negotiation of a new nuclear disarmament treaty between the U.S. and Russia and the ratification and enactment of the Comprehensive Test Ban Treaty (CTBT). She also stressed that the U.S. would deal promptly with these issues. Ms. Gottemoeller then concluded her speech by calling on the other NPT member nations to heed the call of President Obama by focusing not on differences, but on cooperation and consensus.

This multilateralism expressed in Ms. Gottemoeller’s speech has symbolized the change in the U.S. stance from the previous Bush administration, which was prone to unilateralism. It is natural that the non-nuclear weapon states, which lamented the fact that the previous NPT Review Conference in 2005 ended in failure, producing no substantive agreement, have eagerly welcomed the change in U.S. policy.

Mayor Akiba’s expression, “Obamajority,” was also welcomed as a word of encouragement to the U.S. administration. At the same time, bringing about the elimination of nuclear weapons will not be an easy task. A deep-rooted belief in “nuclear deterrence” still exists in the U.S. Efforts to further sway international public opinion, including U.S. public opinion, are essential so that nuclear abolition will be supported by the overwhelming majority of people around the world.