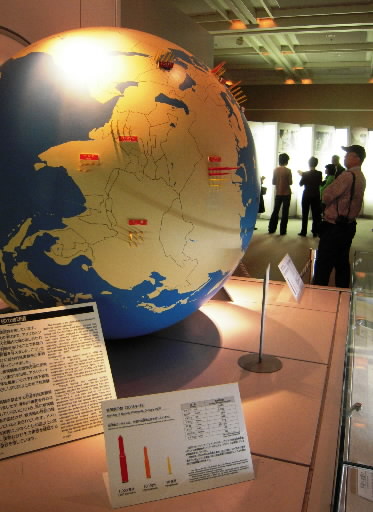 In Hiroshima Peace Memorial Museum, there is a globe which depicts the nuclear weapon states and the number of nuclear warheads they each possess. Though North Korea has been removed from the globe, Israel, for the first time, has been added. The museum commented on the reason for the changes, saying that the information is based on data released by the Stockholm International Peace Research Institute (SIPRI).

SIPRI provides the public with information on the nuclear powers and the numbers of their nuclear warheads as of January each year. In their 2007 report, North Korea was added to the list of nuclear weapon states following that nation’s nuclear testing conducted in October 2006. In the latest report, for 2008, North Korea was removed from the list on the grounds that no information is publicly available to verify its development of nuclear weapons.

In principle, the museum updates its display information based on the SIPRI data. The reason for North Korea’s removal is explained in the exhibit notes.

On the other hand, the museum had refrained from including Israel on the globe of nuclear powers, saying that “The Israeli government has not officially admitted to possessing nuclear weapons” and “In terms of Israel’s nuclear capacity, there is not yet consensus among experts.” Since the museum’s view was different from that of SIPRI, the museum had placed an explanation on the display which indicated that many experts regard Israel as a nuclear weapon state.

To ensure consistency with SIPRI’s view, the museum has removed North Korea and added Israel. The museum says it will now adhere to the SIPRI data.

As a result of the changes, the countries appearing as nuclear weapon states on the globe consist of these eight nations: the United States, Russia, the United Kingdom, France, China, India, Pakistan, and Israel.