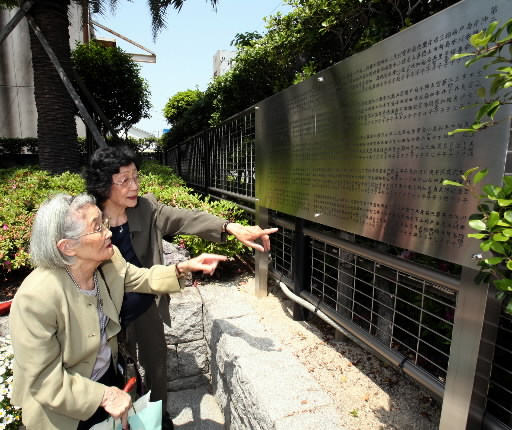 Hiroshima First Municipal Girls’ High School suffered the greatest number of A-bomb deaths among all schools in Hiroshima City. The old plaque bearing the names of the students and teachers who perished in the bombing has been moved to the school’s campus downtown, now known as Funairi High School. At the unveiling ceremony organized by the alumni association of the Girls’ High School and Funairi High School, former schoolmates of the victims traced the names with their fingers. “Rest in peace at your old school,” they said.

The plaque consists of two stainless steel plates, each 60 cm long and 130 cm wide. Inscribed on it are the names of the 676 students and teachers who died on August 6, 1945 while engaged in the dismantling of houses to create fire lanes. In 1985, the alumni association and Funairi High School affixed the plaque to the back of the Municipal Girls’ High School Monument.

Over the years the ink on the plaque began to run so the association replaced the plaque in May 2007 and put the old one in storage. In response to the families’ wish to see their loved ones’ names at the school site, the alumni decided to relocate it.

Most of the victims are thought to have died instantly and their remains have never been found. Every year on August 6, family members weep in front of the plaque, which honors the precious lives stolen by the atomic bomb.

Yachiyo Kato, 80, who was a student at the school, lost 16 classmates in the bombing. “I can still see your faces,” she said, addressing the plaque in a quivering voice. “We wanted to study together for a longer time.” Fujie Ichiba, 87, then a teacher at the Girls’ High School, tearfully prayed for the repose of the victims, saying, “You left the gates of the school and never returned. Welcome back, everyone.”