Nuclear weapons can be eliminated: Mayors of Hiroshima and Nagasaki appeal to U.S. representatives 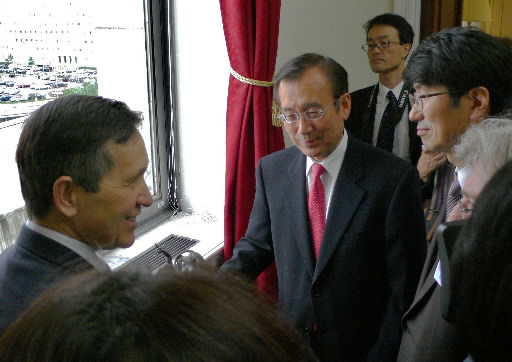 On May 7, Hiroshima Mayor Tadatoshi Akiba, on a visit to the U.S., went to the U.S. capital of Washington, D.C., along with Nagasaki Mayor Tomihisa Taue. They met successively with five U.S. representatives of the Democratic Party, the nation’s governing party. The two mayors called for U.S. cooperation on efforts by Mayors for Peace to advance the abolition of nuclear weapons and for U.S. President Barack Obama to visit the A-bombed cities of Hiroshima and Nagasaki.

Mr. Akiba met with Democratic Representative Dennis Kucinich, a supporter of nuclear abolition and an advocate of establishing a U.S. Department of Peace, at the Congressional Office Building on Capitol Hill. Concerning the Hiroshima-Nagasaki Protocol, for which Mayors for Peace has been calling for adoption at the 2010 Nuclear Non-proliferation Treaty (NPT) Review Conference, Mr. Kucinich said he will raise awareness of the Protocol in Congress, and seek signatures of approval, so the document can be embraced at the conference next year. Regarding Mr. Obama’s visit to Hiroshima and Nagasaki, Mr. Kucinich stated clearly that the President recognized the suffering of the Japanese people and understood that nuclear weapons must be eliminated, and that he would encourage Mr. Obama to visit Hiroshima and Nagasaki.