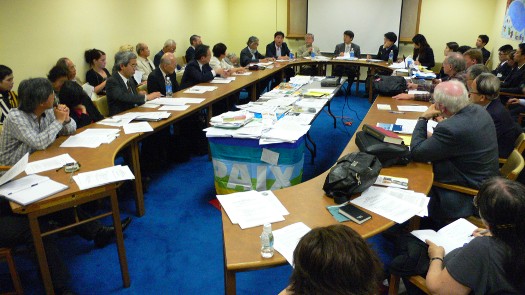 The second half of a two-week session of the third Preparatory Committee (PrepCom) for the Nuclear Non-proliferation Treaty (NPT) Review Conference began at U.N. headquarters in New York on the morning of May 11. The exchange of views by the NPT member nations has proceeded smoothly so far and agreement has already been reached on the Provisional Agenda of the 2010 NPT Review Conference. The following is a summary of the discussions held in the first half of the session, including arguments by the member nations concerning nuclear disarmament.

The prevailing view is that the quick agreement reached by member nations at the PrepCom in regard to the agenda is a sign of “bright prospects” for the NPT Review Conference next year. This is particularly true in light of the fact that more than half of the four-week session of the previous NPT Review Conference in 2005 was spent on lingering discussion about the agenda.

In addition, the PrepCom decided to adjust the original schedule of the 2010 NPT Review Conference, postponing the start for a week. The gathering will now commence on May 3 and continue for four weeks. The schedule was changed to accommodate renovations at the U.N. headquarters building.

Draft Recommendations to the Review Conference

The draft recommendations presented by the chair include eight items. Based on the positions expressed by member nations, the recommendations articulate a recognition of the current state, and future challenges, of nuclear disarmament and non-proliferation.

For instance, the second item of the draft recommendations, titled “an action plan to achieve nuclear disarmament,” requests that the 2010 NPT Review Conference consider the adoption of an action plan for nuclear abolition, based on the recognition that the 13 steps of the final document from the 2000 NPT Review conference have not been carried out. The entry into force of the Comprehensive Test Ban Treaty (CTBT), verifiable reductions in nuclear warheads, and greater transparency in implementing disarmament commitments are also included in the recommendations.

The recommendations also contain such statements as, “Affirm the importance of effective assurances that nuclear-weapon States will not use or threaten to use nuclear weapons against non-nuclear-weapon State parties,” and “Reaffirm that nuclear-weapon-free zones have made and continue to make an important contribution to the strengthening of the international nuclear non-proliferation regime...Support increased cooperation among the parties to all the zones.”

Arguments of the member nations

Notably, many member nations referred to the 13 steps of the final document of the 2000 NPT Review Conference in the delegates’ statements delivered at the start of the PrepCom or in their working documents submitted to the PrepCom. Many non-nuclear weapon states have called on the nuclear weapon states to fully implement these steps and they welcomed the U.S. description in its delegate’s statement that the nation would reaffirm the key decisions made in 2000. Cuba, which gave a speech on behalf of non-aligned nations, has called for developing a specific time frame for the implementation of these steps.

Russia, another nuclear weapon state, criticized the U.S., while avoiding to mention it by name, for its global system of Missile Defense (MD). “No real progress can be achieved in nuclear disarmament while global missile defense is deployed unilaterally,” Russia argued. China, which other member nations have criticized for inducing an arms race, reiterated its established policies, pledging a “no first use” of its nuclear weapons and no use of any kind against non-nuclear weapon states.

There were several proposals, as well, for holding international conferences. Japan announced its intention to host “The 2010 Nuclear Disarmament Conference” ahead of the NPT Review Conference next year. Mongolia, too, expressed plans to organize a nuclear-weapon-free-zone (NWFZ) conference around the same time. Meanwhile, Vietnam called on the U.N. to hold the fourth U.N. Special Session on Disarmament.