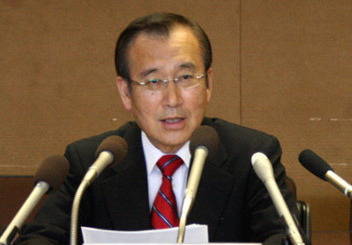 On May 12, Hiroshima Mayor Tadatoshi Akiba, upon his return from the United States, held a news conference to report on the Preparatory Committee (PrepCom) for the Nuclear Non-proliferation Treaty (NPT) Review Conference, which he had attended. He acknowledged calling on government officials of the NPT member nations for their backing of the Hiroshima-Nagasaki Protocol, which provides concrete steps toward nuclear abolition by 2020, and gaining some support.

The Hiroshima-Nagasaki Protocol has been promoted by Mayors for Peace, for which Mr. Akiba serves as president. Mr. Akiba, who met with ambassadors from 15 nations while in New York, commented, “The ambassadors understand the importance of the protocol and some told me they would like to offer their support.” He also revealed plans to strengthen cooperation with non-governmental organizations (NGOs) in the future so that the protocol can be adopted at the NPT Review Conference next spring.

In his speech at an official PrepCom event involving NGOs, Mayor Akiba referred to the large majority of people around the world who support U.S. President Barack Obama’s vision of nuclear abolition as the “Obamajority.” Though a meeting between Mr. Akiba and Mr. Obama did not take place, the mayor said, “I expect Mr. Obama will hear the word ‘Obamajority.’ And I hope he will decide to visit Hiroshima.”