Trees planted at local school stand on an axis of peace 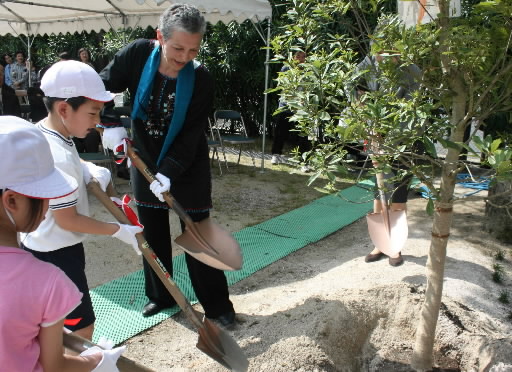 Students at Motomachi Elementary School planted trees in their schoolyard on May 13 for what is tentatively called the “Grove of Friendship.” The inspiration for this activity came from Nassrine Azimi, the director of the United Nations Institute for Training and Research (UNITAR) Hiroshima Office. The grove is designed as a place for promoting peace education and international understanding. Eight trees were planted, including a third-generation hackberry tree, a descendant of a tree that was exposed to the atomic bombing.

In April, Ms. Azimi learned about the special location of the school through an acquaintance and suggested that a place for children be created on this axis as a wish for peace. The school decided to plant trees in the 150-square-meter area in the southwestern part of the schoolyard.

All 146 students of the elementary school, almost 40 percent of whom are non-Japanese, Ms. Azimi, and some local residents attended the tree-planting ceremony. They planted eight trees of seven types. One of them is a third-generation hackberry tree whose first-generation tree was exposed to the A-bomb on the nearby river bank and died about 20 years ago. Others include a bayberry, which is popular in China, and a bay laurel, native to the Mediterranean region. The underlying messages of the project involve handing down memories of the atomic bombing and promoting friendly international relationships.

To officially name the grove, the school will seek ideas from the students. A ceremony to celebrate its completion and a peace study session will then be held on August 6. Daiki Tokoyama, 11, a sixth-grader, helped plant the hackberry tree and said, “I hope these trees from different countries will grow and get on well with each other.”