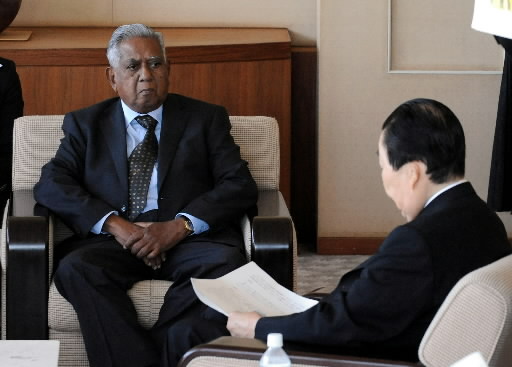 Mr. Takahashi met Mr. Nathan in the reception room of the International Conference Center Hiroshima in Peace Memorial Park. Mr. Takahashi first offered an apology for the “terrible suffering of the Singaporean people under the occupation of the Japanese Imperial Army.” He then spoke for about 30 minutes, describing the disastrous scenes of the atomic bombing, including people with severe burns running frantically for safety and bodies floating on the surface of the rivers. Mr. Takahashi also mentioned to Mr. Nathan that the survivors believe that nuclear weapons can be eliminated. The president listened pensively to Mr. Takahashi, sometimes with his eyes closed. Mr. Nathan said he found the encounter moving and that such horror must not be repeated.

President Nathan himself had wished to visit Hiroshima. He offered flowers at the Cenotaph for the A-bomb Victims and visited Peace Memorial Museum. “I was impressed to see how the people of Hiroshima rose from deep sorrow to rebuild their city,” he said.