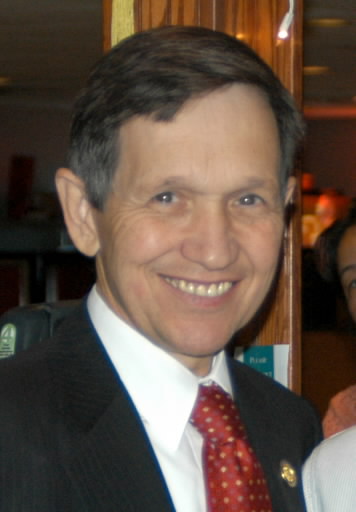 On May 14, 335 letters addressed to U.S. President Barack Obama were sent to U.S. Democratic Representative Dennis Kucinich, 62. These letters were collected after a call by junior writers for “Peace Seeds,” a children’s newspaper produced by teens in Hiroshima that appears as a regular feature in the Chugoku Shimbun.

Seeking a sure way for the letters to be delivered to Mr. Obama, the junior writers asked Mr. Kucinich for his support. At the end of April, they received an email from his office that said Mr. Kucinichi would be happy to hand these letters to the president.

Mr. Kucinich was first elected to the U.S. House of Representatives in 1996 after serving as mayor of Cleveland, Ohio and an Ohio state senator. He is known as a supporter of nuclear abolition and has proposed establishing a U.S. Department of Peace.