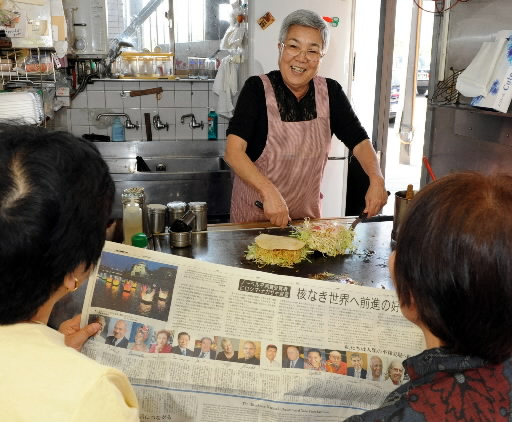 The Hiroshima-Nagasaki Declaration of Nobel Peace Laureates, which was published in the morning edition of the Chugoku Shimbun on May 18, has been welcomed by atomic bomb survivors (hibakusha) and people engaged in campaigns for nuclear abolition. The declaration has reaffirmed their belief that nuclear weapons can be eliminated.

Sunao Tsuboi, 84, chairman of the Hiroshima Prefectural Confederation of A-bomb Sufferers Organizations, has met three of the 17 Nobel Peace Prize laureates who signed the declaration, including Betty Williams. Ms. Williams visited Hiroshima in 2006. Mr. Tsuboi commented, “The Hiroshima-Nagasaki Declaration has given courage to the citizens of Japan, including hibakusha. It has provided us, hibakusha who have been persistent in conveying the horrific reality of the atomic bombings, with the will to continue taking action.”

Kazushi Kaneko, 83, chairman of another faction of the Hiroshima Prefectural Confederation of A-bomb Sufferers Organizations, stated, “U.S. President Barack Obama has vowed to pursue a world without nuclear weapons, but such a world will not emerge spontaneously. I believe we must appeal for the elimination of nuclear weapons with all our might.”

Sigeteru Tamura, 78, chairman of Yudaen, the Yamaguchi Prefectural social welfare center for A-bomb survivors, said, “Waves of support for nuclear abolition are now being generated across the world.” Toshiko Kajiyama, 67, an A-bomb survivor and the owner of an okonomiyaki [a kind of crepe made with meat and cabbage] shop in Hiroshima, said she was touched by the declaration. “It made me realize again that there are people around the world who think seriously about nuclear weapons and seek their abolition,” she said.

Regarding the details of the Hiroshima-Nagasaki Declaration, Motofumi Asai, 67, president of the Hiroshima Peace Institute at Hiroshima City University, praised the declaration for describing nuclear weapons as “indiscriminate, immoral, and illegal.” Kazuhiko Tamaki, 56, vice president of the Peace Depot, a non-profit organization, and secretary general of ICNND Japan NGO Network, expressed his enthusiasm for the statement, saying “As the declaration suggests, ‘political will’ is required for nuclear abolition. We would like to step up our efforts to bring forth this political will in Japan.”

On May 18, Hiroshima Mayor Tadatoshi Akiba and Nagasaki Mayor Tomihisa Taue hailed the Hiroshima-Nagasaki Declaration as “encouraging.” The two mayors then again expressed their enthusiasm for efforts to make a success of the Nuclear Non-proliferation Treaty (NPT) Review Conference next year.

Speaking by telephone, Mr. Taue said, “We’ve been pondering the importance of raising more voices of support across the world for President Obama’s vision, and these influential people have made such a call. We would like to bring together the wisdom of citizens and motivate world leaders to build a consensus for abolition.”