93 volumes of the register for the A-bomb victims, containing 258,310 names, are aired 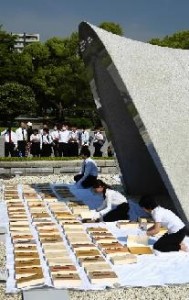 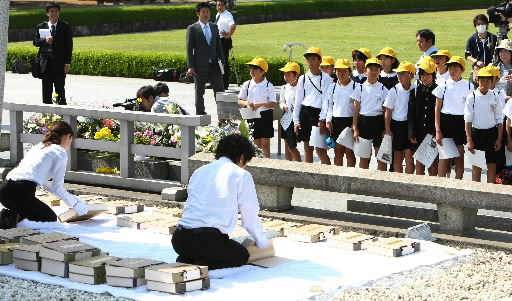 On May 20, the register of the names of those who died due to the atomic bombing of Hiroshima was taken out of a stone chest at the Cenotaph for the A-bomb Victims in Hiroshima Peace Memorial Park, where it has been housed, and exposed to the air. The 93 volumes of the register containing 258,310 names were opened to the fresh air and sunshine before the rainy season arrives in June.

Twelve city employees offered a silent prayer at 8:15 a.m., the time the atomic bomb was dropped. They placed the register on white sheets laid out in front of the cenotaph and checked each page of the volumes for damage and discoloration. The register was apparently in good condition.

All of the volumes, except the 93rd volume in which new names can be added, were returned to the stone chest on that day. The names of about 5,300 people who passed away or whose deaths were confirmed since August 5 of last year will be added to the 93rd and the new, 94th volumes. These volumes will be dedicated to the cenotaph during the Peace Memorial Ceremony on August 6 this year.

The City of Hiroshima airs the register at this time every year. Though it began the work from 9:30 a.m. through last year, the starting time was changed to 8:15 a.m. this year, the time the atomic bomb was dropped. The city, for the first time, invited school children and students who were visiting Hiroshima on school trips to observe the work. Sixteen sixth graders from Natajima Elementary School, in Yamaguchi Prefecture, and about 250 third graders from Gihoku Junior High School, in Gifu Prefecture, looked on. Madoka Yasuda, 14, from Gihoku Junior High School said, “When I saw at the register, I was surprised to find out that so many people have died.”