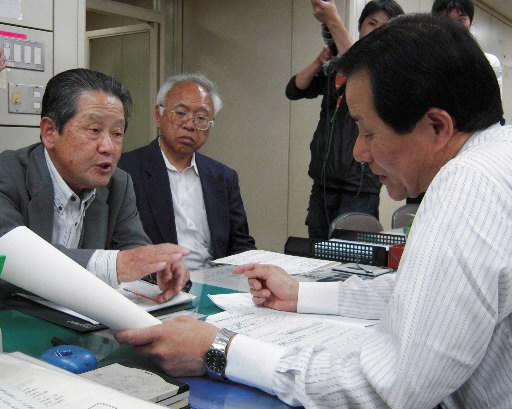 On May 21, a citizens’ group in Hiroshima that supports atomic bomb survivors (hibakusha) in South Korea filed an application with the City of Hiroshima for A-bomb disease certification on behalf of a Korean man who cannot come to Japan due to illness. Hibakusha overseas are required to visit Japan to file an application for this certification. The supporters of hibakusha in Korea are considering whether to file a lawsuit if the Japanese government, which will screen the application materials, turns down the application on the grounds that the applicant is not fulfilling the requirement of visiting Japan.

On May 21, four people, including Keisaburo Toyonaga, 73, director of the Hiroshima branch of the Association of Citizens for the Support of South Korean Atomic Bomb Victims, visited the Atomic Bomb Survivors Relief Department of the City of Hiroshima. They submitted the application materials for A-bomb disease certification on behalf of Han Ju Suk, 72, who lives in Daegu City and has been suffering from esophageal cancer. Mr. Han was eight years old when he was exposed to the atomic bombing at a place 1.8 kilometers from the hypocenter. With Mr. Toyonaga’s support, he had planned to visit Japan in March to apply for the Atomic Bomb Survivor’s Certificate. However, Mr. Han suddenly became ill before his scheduled visit.

At a news conference, Mr. Toyonaga emphasized the fact that the addendum to the revised Atomic Bomb Survivors Relief Law obliges consideration in regard to the procedure and necessary measures for filing the application. “I hope the Japanese government will recognize the dire situation of those who are required to come to Japan despite their serious illnesses and will immediately improve the situation,” he argued.