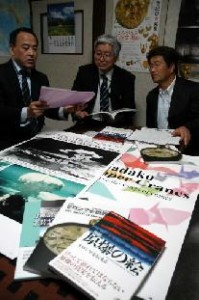 The Hiroshima-Bulgaria Association, a citizens’ group based in Hiroshima, will hold an A-bomb exhibition in the Bulgarian capital of Sofia from May 29 through June 11. Four members of the association will leave for Bulgaria on May 28.

The exhibition will be held at the Japan-Bulgaria Education and Culture Center in the 18th Secondary Comprehensive School in Sofia. On display will be 56 exhibits, featuring photographs and posters, which depict the devastation of the atomic bombing, the damage caused by radiation, and the story of Sadako Sasaki, a girl whose death from leukemia led to the construction of the Children’s Peace Monument. Testimonies by A-bomb survivors recorded on DVD will also be screened.

The Hiroshima-Bulgaria Association was established in 2005. The organization has held three A-bomb exhibitions in Bulgaria, including in the city of Kazanlak, whose mayor belongs to Mayors for Peace. The group proposed the A-bomb exhibition when its members visited Sofia in June 2008.

The delegation will visit six cities through June 9. They will present pictures drawn by children in Hiroshima Prefecture and share ideas for future exchanges. Ko Imamura, 64, president of the association, said they would like to convey the spirit of Hiroshima by appealing for the elimination of nuclear weapons.