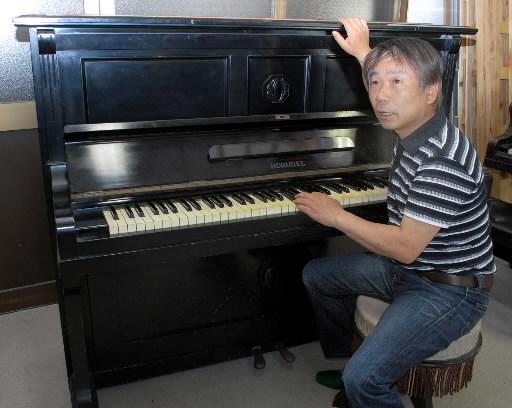 Mitsunori Yagawa, 57, is a piano turner in Hiroshima who restores pianos that were damaged in the atomic bombing. He is planning to hold the first overseas concert with an A-bombed piano in September 2010 in New York. With U.S. President Barack Obama now appealing for nuclear abolition, Mr. Yagawa felt this would be an ideal opportunity to arrange such a concert abroad. In June he will begin tuning the piano that will be used for the concert.

Deciding to hold the concert in the U.S., Mr. Yagawa chose New York, a site struck by the terrorist attacks of September 11, 2001. This month he began soliciting donations for the costs involved in staging the event, including the expense of shipping the piano. He will seek a local group in New York to provide support for producing the concert and locating a suitable venue.

The concert will be an appeal for peace that connects the indiscriminate terrorist attacks against civilians in the U.S. with the atomic bombings in Japan. The plan is for performers from both Japan and the U.S. to take part in the event. The concert will also offer an opportunity for audience members to touch the A-bombed piano. Mr. Yagawa expressed his hopes for the project, saying, “Through the A-bombed piano, I would like to widen the circle of empathy among people and help provide momentum for nuclear abolition.”

The piano that will be used for the concert was donated this month by an 81-year-old woman in Hiroshima. The piano was located at the woman’s house, 2.6 kilometers from the hypocenter. At the time of the bombing, the piano was showered with shards of glass from windows that were blown out by the blast. Scratches in the lid which covers the piano keys are the scars from that time.

The woman donated the piano to Mr. Yagawa in preparation for a move to other quarters. Mr. Yagawa will leave the visible damage untouched and revive the piano by changing and tuning its strings. This is the fifth A-bombed piano that Mr. Yagawa has restored.

He began to look for A-bombed pianos 11 years ago and this is the first piano he has located in four years. These days there is little news of the preservation of further A-bombed pianos. “I don’t think there are many A-bombed pianos left,” said Mr. Yagawa. “I intend to revive this piano with care, assuming this may be the last one.”