Peace Clock is reset to one 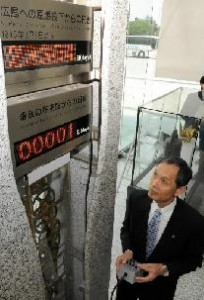 A clock called the “Peace Watch Tower,” which displays the number of days since the world’s last nuclear test was conducted, was reset to one by Koichiro Maeda, director of Hiroshima Peace Memorial Museum, on May 26 due to North Korea’s second nuclear test.

The clock tower was installed in August 2001 with the hope of realizing a world free of nuclear testing. Since North Korea’s first nuclear test on October 9, 2006, the clock had been advancing the record for the longest duration without a nuclear test, but the number of days stopped at 959 on May 25.