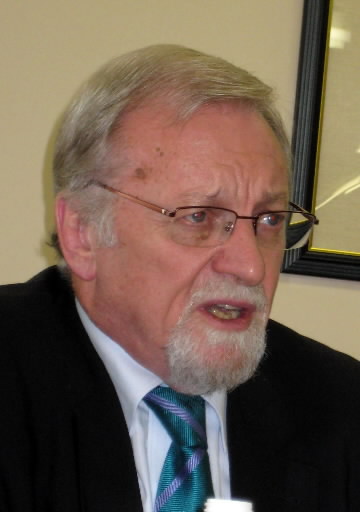 Gareth Evans, co-chair of the International Commission on Nuclear Non-proliferation and Disarmament (ICNND), appeared at a press conference in Tokyo on May 27. Advocating a diminished role for nuclear weapons, the former Australian Foreign Minister urged that the current Japanese government’s broad interpretation of the U.S. nuclear umbrella be reconsidered.

The press conference was held after Mr. Evans exchanged views with lawmakers and the members of citizens’ groups. Mr. Evans said that reducing the role of nuclear weapons is critical for the course of nuclear disarmament. He stressed that Japan’s stance is unconvincing if it relies on nuclear deterrence against a wide range of weapons while calling on other nations to shrink their own nuclear arsenals. Mr. Evans is thus critical of the Japanese government’s policy of nuclear deterrence against biological, chemical, and conventional weapons as well as nuclear weapons.

He argued that Japan and South Korea could cope with the vast majority of potential threats that may arise in the future with conventional weapons. The only rationale for relying on nuclear weapons would be to deter a specifically nuclear threat.

ICNND will hold a meeting in Moscow in June and another in Hiroshima in October. By the end of this year, the organization will compile a report outlining specific measures for the elimination of nuclear weapons. Mr. Evans was invited to Tokyo by the ICNND Japan NGO Network, one of whose joint representatives is Terumi Tanaka, secretary general of the Japan Confederation of A- and H-Bomb Sufferers Organizations.

Related articles
Hiroshima mayor to call for nuclear abolition at ICNND in Russia (May 18, 2009)
ツイート
Return