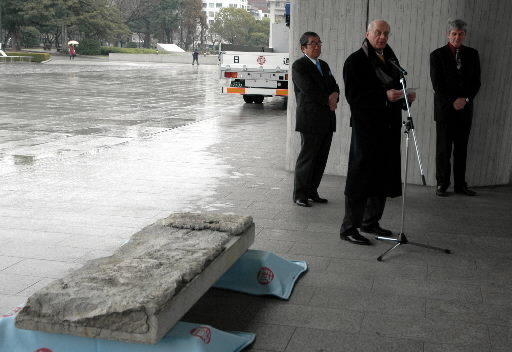 Commemorating the 140th anniversary of the establishment of diplomatic relations between Japan and Austria, a peace monument that incorporates a stone from the former Hiroshima City Hall, which was struck by the atomic bomb, is slated to be built in Vienna, the capital of Austria. As part of the project co-sponsored by the Hiroshima Austria Association and the Japan Society of Austria in Vienna, the stone was presented to the Austrian city on February 27 at Hiroshima Peace Memorial Park.

The stone, 180.5 cm long, 72 cm wide, and 15.5 cm thick, had been preserved by the City Hiroshima. Georg Illichmann, director of the Japan Society of Austria in Vienna, spoke at the presentation ceremony, saying, “The citizens of Vienna will always have a chance to reflect on Hiroshima and the importance of peace in the world while standing in front of the monument.” The stone then departed by truck for Narita Airport in Tokyo.

The monument will be raised this autumn in the Viennese suburb that was home to Karl Bruckner, an Austrian author who wrote a book about Sadako Sasaki, a girl who was exposed to the atomic bombing in Hiroshima and later died of leukemia. The words “World Peace” will be inscribed on the monument in German, Japanese, and English.