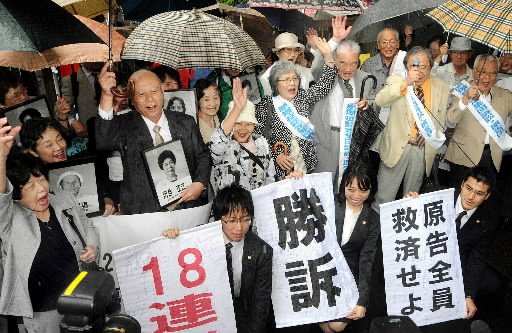 The court decision marked the 18th consecutive defeat for the Japanese government in class action lawsuits over A-bomb disease certification, including its defeats at High Courts. The class action lawsuits have been filed at 17 District Courts nationwide since April 2003. After the Tokyo High Court ruling was issued, Chief Cabinet Secretary Takeo Kawamura said at a news conference, “In consideration of the series of judicial decisions to date, we must accelerate moves for an early settlement.” The government will review its A-bomb disease certification procedures and consider relief measures for the plaintiffs who are pursuing the settlement.

However, the Ministry of Health, Labour, and Welfare (MHLW) is putting up strong resistance to offering relief to all plaintiffs, which would include some relief measures for those who lost their cases. It is expected that the parties concerned will encounter more difficulties before a collective settlement is reached.

Regarding the correlation between a disease and radiation from the atomic bombings, the court decision noted the following points: 1) that even when current scientific knowledge apparently contradicts a case, such cases should still be judged in a comprehensive manner upon examination of all available evidence, and 2) that the government should heed aging hibakusha and the nature of the Atomic Bomb Survivors Relief Law, which, in essence, constitutes national compensation. Concerning, in particular, impaired liver function and thyroid dysfunction, the court stated clearly: “The government should screen application materials on the premise that there is a correlation between these diseases and the radiation from the atomic bombs.”

The court conducted meticulous inquiries about whether the individual plaintiffs, who were not recognized as A-bomb disease sufferers, experienced acute symptoms after they were exposed to the atomic bombings and about their health conditions before and after the bombings. The court then made its decisions and recognized diseases, such as impaired liver function and thyroid dysfunction, as well as cancer that developed after a plaintiff was exposed to the atomic bombing at a place five kilometers from the hypocenter, as A-bomb diseases. These diseases are not included in the immediate certification for the A-bomb diseases in the current certification criteria, which were introduced in April 2008.

Hidenori Yamamoto, 76, the leader of a nationwide group of plaintiffs involved in the class action lawsuits over the A-bomb disease certification, praised the Tokyo High Court ruling highly, but, at the same time, commented, “We cannot be genuinely happy unless all 306 plaintiffs are recognized as A-bomb disease sufferers. We will do our best so that all plaintiffs will receive relief.”

Prime Minister Taro Aso said: “We would like to address the issue with a view to offering relief to hibakusha”

On May 28, Japanese Prime Minister Taro Aso answered questions from the press at the Prime Minister’s residence, in regard to the class action lawsuits over A-bomb disease certification. He commented, “The certification criteria for A-bomb diseases, which were revised last year, broadened the range of diseases that are certified as A-bomb diseases. Still, some point out the gap between the judicial decisions and the criteria. We will thoroughly examine the series of rulings and address the issue with a view to offering relief to hibakusha.”

The Tokyo High Court ruling on the class action lawsuits over A-bomb disease certification has acknowledged the reality experienced by individual plaintiffs in regard to the atomic bombings and brought victory to nine hibakusha, to whom the Japanese government has not offered relief. The time has come for the government to keep its promise to make a political settlement in line with the words of Chief Cabinet Secretary Takeo Kawamura last November: “The Tokyo High Court ruling in May will be the last judicial decision that the government will wait for. We have to make a judgment on the legal battles over A-bomb disease certification in a comprehensive manner.”

MHLW stressed, “Sixty percent of the plaintiffs are recognized as A-bomb disease sufferers. We have taken a step further in forming judgments, which was not possible under the former criteria.” But some criticize the government for interfering in the advisory opinion that the governing party issued in view of the plaintiffs’ claims and continuing its dogged resistance, let alone its lack of enthusiasm for reviewing the certification procedure and actively offering the relief that has been sought by the plaintiffs.

The hibakusha hope that the government will finally recognize that the illnesses from which they suffer physically and mentally, 64 years after the war, have been caused by the atomic bombings. In spite of their advancing age, they have fought resolutely against the government and staged sit-in protests in front of the MHLW to secure the earliest possible settlement. There is no alternative but for the Japanese government to fundamentally transform its administrative practices involving hibakusha.