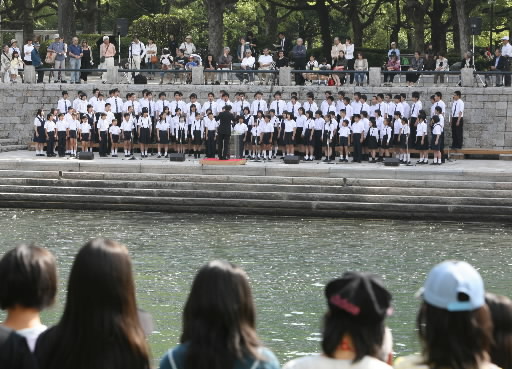 On May 31 a premiere of “Requiem for Hiroshima” was given on the bank of the Motoyasu River in front of the Atomic Bomb Dome. The requiem was composed by Mamoru Samuragochi, 45, a second-generation A-bomb survivor and a Yokohama resident originally from Hiroshima City. While he looked on, some 100 local children and high school students sang in chorus, conveying Mr. Samuragochi’s deep prayer for peace.

Accompanied by the solemn music, the choir sang only an “Ah” sound. Tourists stopped to listen to the 6-minute piece that resounded over the river.

Mr. Samuragochi’s parents suffered the atomic bombing and his wife is also a second-generation A-bomb survivor. The loss of his hearing at the age of 35 strengthened his wish for peace. He devised a choral part without words in the hopes that “listeners could feel the darkness of the atomic bombing and a profound prayer for peace beyond any language.”

Mr. Samuragochi, who watched the performance from the opposite shore, bowed deeply and told the choir, “You have expressed my wish fully. I hope you will pass on what happened here in Hiroshima.”