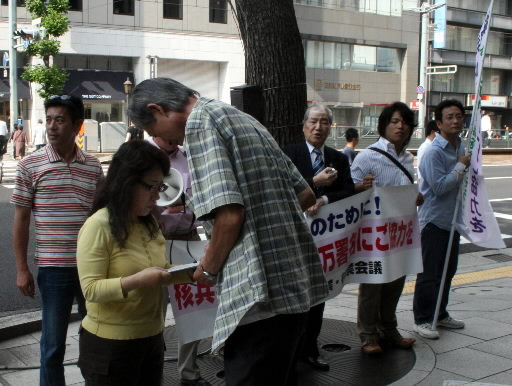 Three organizations have begun a signature drive to advance the abolition of nuclear weapons by the year 2020. The Japanese Trade Union Confederation, the Japan Congress Against A- and H-Bombs, and the National Council for Peace and Against Nuclear Weapons kicked off their campaign in Hiroshima Prefecture on May 31.

With targets of 10 million signatures nationwide, and 800,000 from Hiroshima Prefecture, the groups plans to submit their petition to the Japanese government and the United Nations at the Nuclear Non-proliferation Treaty (NPT) Review Conference to be held next spring.

The petition urges the review conference to devise a concrete road map toward the abolition of nuclear weapons and achieve this aim by 2020. On the first day of the campaign in Hiroshima, about 80 members of the three organizations stood in the busy downtown district, asking shoppers and passersby to support their campaign.

Yukio Itami, president of the Hiroshima chapter of the Japanese Trade Union Confederation, stressed, “The A-bombed city of Hiroshima is determined to lead the drive to rouse public opinion.” The three groups will continue to solicit support from the public by collecting signatures on city streets and at other locations. Through the International Trade Union Confederation, the organizations hope to expand the drive worldwide.

Prior to the start of the campaign, a panel discussion was held at a symposium which discussed anti-nuclear efforts in the run-up to the review conference. Steven Leeper, chairman of the Hiroshima Peace Culture Foundation, emphasized the significance of the drive, calling it “a campaign which can save the world,” as the drive calls for a clear deadline to abolish all nuclear weapons.

Akira Tashiro, executive director of the Chugoku Shimbun’s Hiroshima Peace Media Center, pointed out the challenge facing the realization of a world without nuclear weapons, saying, “Each nation is urged to change its outlook from prioritizing its own national interest to respecting the common interest of the whole planet.”