Students to hold study session in line with efforts to realize U.S. president’s visit to Hiroshima and Nagasaki 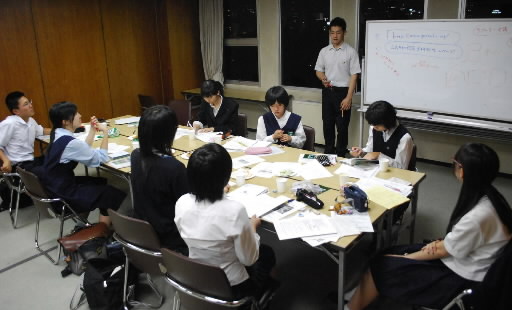 Nine students, representing junior high and high school students in Hiroshima who are seeking a visit by U.S. President Barack Obama to the A-bombed cities of Hiroshima and Nagasaki, held a meeting in downtown Hiroshima on the evening of June 1. They made the decision to invite Hiroshi Oshima, a professor at Hiroshima Shudo University and a specialist in American politics, to lead a study session to learn more about Mr. Obama and the reactions in the U.S. to Mr. Obama’s pledge to pursue a world without nuclear weapons.

The study session is planned by the nine students with an eye toward learning about nuclear issues in depth before deciding on a course of action. At the meeting on June 1, the students took part in some preparation for the study session by presenting the results of their individual research, including information on international treaties related to nuclear weapons and the reactions of other nations to Mr. Obama’s vision of nuclear abolition.