Interview with Sadao Hirano, contributor to collection of writing by A-bomb survivors 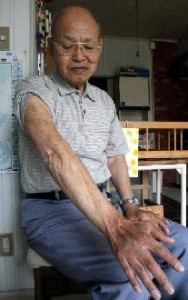 The Hiroshima Prefectural Confederation of A-bomb Sufferers Organizations, chaired by Sunao Tsuboi, will publish a collection of writing by atomic bomb survivors (hibakusha) titled The Lost Decade at the end of July. Sadao Hirano, 76, a resident of Hiroshima and one of the contributors, said, “The ‘Lost Decade’ was the hardest time in my life.”

Mr. Hirano’s A-bomb account begins as follows: “I was afflicted with keloids in those ten years after the atomic bombing. I had ugly keloid scars on my head, right ear, right cheek, neck, hands, back, and legs. They hurt day and night. It felt like I was cursed...”

On August 6, 1945, as Mr. Hirano, who was a student at Prefectural Hiroshima Commercial School, was preparing to help demolish houses to create a fire lane, he was exposed to the atomic bombing 2.2 kilometers from the hypocenter. He was enveloped by a pale purple flash, like the flashes of thousands of cameras. The next thing he knew, his body was burning hot and the skin from his arms was dangling down from his hands.

After the war, he worked as a part-time cleaner for the occupation forces to contribute to the family income. About 25 percent of his body--his hands, arms, feet, back, and head--were covered with keloid scars and his skin often tore. “When I lifted something heavy, the keloids tore and bled...” He goes on to describe the days he would massage his hands in warm water to bear the pain.

After graduating from Hiroshima Kanon High school, he landed a job at Hiroshima Shinkin Bank in 1951. “It was very difficult to get a job at that time,” he writes. “It was all I could do to manage to keep up with my co-workers so I wouldn’t fall behind.” When he went out to collect money for the bank, he noticed that people would stare at his arms, which depressed him.

He still recalls the words of encouragement given by a high school teacher: “Even being at the bottom of the workplace is okay. Once you go out into the world, build up your physical strength and strive to live your life with all your might.” Since then, every day for nearly 60 years, he has performed 20 push-ups.

Commenting on The Lost Decade, Mr. Hirano expressed his dearest wish: “Those ten years were the loneliest and hardest time for hibakusha. I hope many people will read the testimonies that convey how hibakusha have struggled to survive.”