Nuclear weapons can be eliminated: Exhibition of original pictures of illustrated book about Hiroshima-Nagasaki Protocol 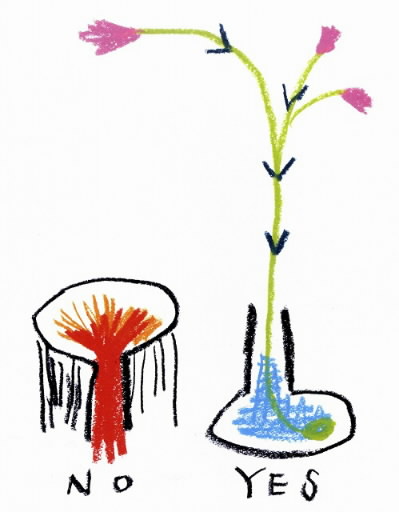 An exhibition of original pictures of an illustrated book that will introduce the Hiroshima-Nagasaki Protocol, a road map for nuclear abolition, will be held in the Oriental Hotel Hiroshima from July 31 to September 9. Seitaro Kuroda, 70, an artist and a resident of Kitakyushu, has created the illustrations to depict the protocol. Admission to the exhibition is free.

The project to create the illustrated book, to be published in July, is being coordinated by the “YES! Campaign,” a citizens’ group composed of roughly 20 volunteers from Hiroshima. The group, for which Yoko Nishimura serves as secretary general, appealed to Mr. Kuroda for his participation. As the Oriental Hotel Hiroshima expressed support for the group’s aim to disseminate information on the Hiroshima-Nagasaki Protocol, the exhibition has been arranged for this venue.

Mr. Kuroda received the Kodansha Cultural Award in 1985. In the wake of nuclear tests by France in 1995, he released an illustration with the image of a mushroom cloud. On August 3, the group will invite Mr. Kuroda to take part in an event where he will spontaneously add color to his pictures for peace accompanied by music and song. Advance tickets are 4,300 yen.