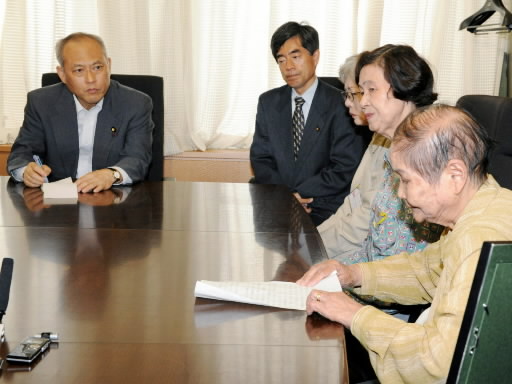 The ruling that has recognized impaired liver function and thyroid dysfunction as A-bomb diseases will soon be finalized at the Tokyo High Court as well as at the Osaka High Court. The plaintiffs have sought to add these two diseases to the list of illnesses for immediate certification of A-bomb disease. The Ministry of Health, Labor, and Welfare (MHLW), at its medical subcommittee, has been considering since last October whether to include these two illnesses as A-bomb diseases. In light of the judicial judgment, MHLW will begin to frame its conclusion at a meeting of the subcommittee on June 22.

The plaintiffs, seeking a collective settlement of the class action lawsuits, demand that the government officially recognize certain illnesses as A-bomb diseases that are not presently included in the list for immediate certification. They have also been asking for relief measures for the plaintiffs who have not been recognized as A-bomb disease sufferers. A government official has indicated that the government would, based on Prime Minister Aso’s decision, announce a comprehensive policy for the settlement by the anniversaries of the atomic bombings in August.

However, cautious arguments, such as one questioning “whether the government can gain the public’s understanding for providing support to plaintiffs who lost their cases in court,” have also been persistent within the government. Though “the advisory opinion,” which comes close to satisfying the demands of the plaintiffs, has been submitted by the Atomic Bomb Victims’ Policy-related Project Team to the government, the path toward the settlement remains uncertain.

At a regular news conference on June 9, Chief Cabinet Secretary Takeo Kawamura commented on the settlement of the lawsuits: “We will thoroughly examine the court rulings to date, including those issued by the district courts, and give serious consideration on how to ensure consistency of the court rulings and the certification criteria. We would like to exert efforts to draw a conclusion on available measures for the collective settlement as soon as possible.”

On the evening of June 9, Prime Minister Taro Aso commented on providing relief to all plaintiffs, which has been sought by the plaintiffs of the class action lawsuits over A-bomb disease certification: “I believe that extending relief to the plaintiffs en masse is quite difficult from a legal standpoint, because the A-bomb disease cases differ widely among individuals.” He answered questions from the press at the prime minister’s residence.

In regard to offering relief to all plaintiffs, Health Minister Yoichi Masuzoe has acknowledged that “the final decision will be made by the prime minister.” It is believed that the prime minister indicated his wary stance on the issue by noting the legal difficulty.

On June 9, the plaintiffs of class action lawsuits over A-bomb disease certification met with Health Minister Yoichi Masuzoe at the Diet. Fourteen plaintiffs, including atomic bomb survivors (hibakusha), attended the meeting. Haruko Nishimoto, 71, a resident of the city of Mitaka, Tokyo, described her A-bomb experience in Nagasaki and called for the certification procedure to be revised while the hibakusha are still alive.

Mr. Masuzoe stressed, “As a politician, I will take the legal judgment seriously.” Concerning the settlement, he said that MHLW would, in view of plaintiffs’ claims and opinions of experts, including doctors, seek Prime Minister Taro Aso’s judgment. He then continued, “I would like to reach a settlement at the earliest possible date in a suitable way that can win the public’s support.”

After the meeting, Hidenori Yamamoto, 76, the leader of the nationwide group of plaintiffs involved in the class action lawsuits over A-bomb disease certification, commented, “I sensed Mr. Masuzoe’s sincerity. But I also feel that there is still a long way to go before we can secure a collective settlement and relief for all plaintiffs.”