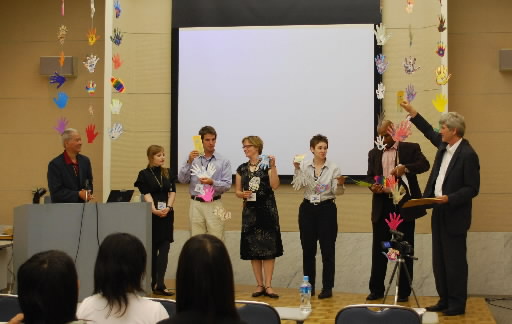 The Global Art Project for Peace, a citizens’ group in the U.S. state of Arizona, held a gathering at Peace Memorial Museum on June 9. The members of the organization appealed to educators and others in Hiroshima for their participation in the “Paper Hands for Peace” project.

In the project, participants cut out paper in the shape of their hands and write messages or draw pictures for peace on them. The paper hands are then hung using string. Katherine Josten, founder and director of the Global Art Project for Peace, has been calling for people’s participation in the program in various countries since 1998, and has already collected several thousand paper hands.

Ms. Josten suggested that citizens of Hiroshima also join the effort and the artwork could be utilized at Peace Memorial Museum. Students from Webster University in the state of Missouri, supporters of the project, handed some paper hands to Steven Leeper, chairman of the Hiroshima Peace Culture Foundation.

“This is a wonderful idea which allows anyone to participate in peace building,” Mr. Leeper said. “We would like to explore the possibility of creating space in the museum where visitors can reflect on peace through various artistic activities.”