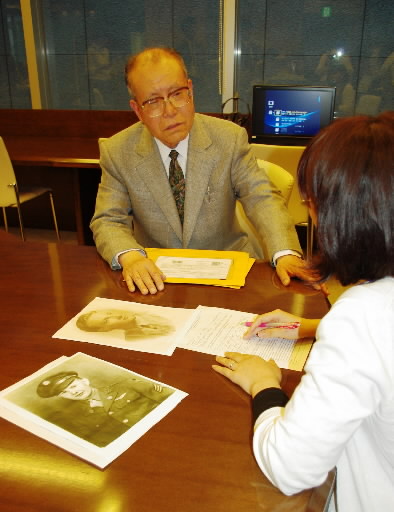 Photographs of two crew members of a U.S. bomber were registered at Hiroshima National Peace Memorial Hall for the Atomic Bomb Victims on June 12. The two American soldiers were exposed to the atomic bomb and died while being held as POWs in Hiroshima. Relatives of the two soldiers sent the photos to Shigeaki Mori, 72, a Hiroshima resident and history researcher, who has been investigating the American POWs who encountered the atomic bomb. Mr. Mori brought the photos to Peace Memorial Hall, which now holds photos of a total of 11 U.S. soldiers.

The two Americans were gunner Ralph Neal, 23 at the time, and engineer Buford Ellison, 22. They were crew members of the Lonesome Lady, a bomber shot down by the Imperial Japanese Army into the Seto Inland Sea on July 28, 1945. According to Mr. Mori, it is believed that 12 American soldiers were killed in the atomic bombing of Hiroshima and six were crew members of this bomber. They were held in captivity at the Chugoku Military District Headquarters and other nearby facilities close to the hypocenter.

While investigating the circumstances of their exposure to the bomb and searching for their relatives, Mr. Mori began registering the photos of the soldiers at the Hall. The relatives of Mr. Neal and Mr. Ellison learned about Mr. Mori’s efforts through the media and information shared by veterans. The photos sent from the relatives were accompanied by a letter saying that the tragedy of the atomic bombing must never be forgotten.

“They were considered enemies during the war, but they were human beings, too, and victims of the atomic bomb. Their souls deserve consolation,” said a tearful Mr. Mori, who also experienced the bombing of Hiroshima.