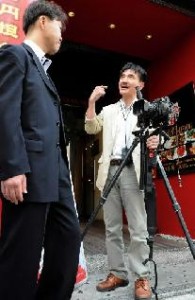 On June 13, Keizo Yoshida, 48, a photographer and resident of Tokyo, who has taken photos of second-generation atomic bomb survivors (hibakusha) like himself, visited Hirochika Seki, 44, a restaurant owner who lives in Hiroshima. Mr. Seki has, for four years, maintained a fundraising campaign for peace at one of his restaurants. Mr. Yoshida and Mr. Seki have confirmed “their mission to promote peace” as second-generation hibakusha and nurtured their friendship.

Mr. Seki’s parents experienced the atomic bombing of Hiroshima. With part of the earnings from his restaurant downtown and donations from his customers, Mr. Seki has purchased nursing care equipment and presented it to a nursing home for hibakusha. Mr. Yoshida, who learned about Mr. Seki’s activity through his blog, asked to take photos of Mr. Seki.

On June 13, Mr. Yoshida aimed his camera at Mr. Seki, who smiled with the sign for the fundraising campaign in front of his restaurant. The two men sympathize with each other’s activities. Mr. Yoshida said, “I’m impressed by Mr. Seki’s idea to tie his business with a peace activity,” while Mr. Seki commented, “Photographs are a good way to broaden understanding of the atomic bombings through second-generation hibakusha.”

From the age of 26, Mr. Yoshida traveled to war zones, including Afghanistan, as a photojournalist. Over the roughly ten years he engaged in this work, he came to realize that he himself, as a second-generation hibakusha, was intimately involved in the war that Japan had waged. At that point, for the first time, he listened to the A-bomb account of his 74-year-old mother, who was exposed to the atomic bombing of Nagasaki. Since then he has been traveling through Japan to take photos of second-generation hibakusha.