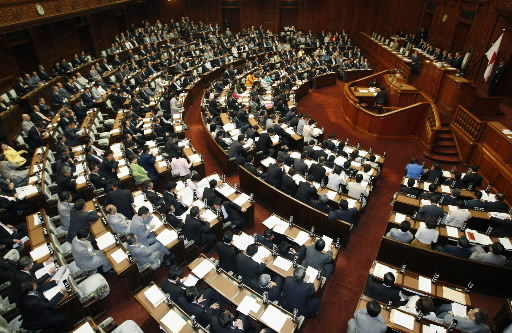 At a plenary session on June 16, the House of Representatives unanimously adopted a resolution urging the Japanese government to fulfill its responsibility as the sole nation to have suffered nuclear attack by assuming a leading role among the international community in efforts to advance the abolition of nuclear weapons. This is the first parliamentary resolution related to nuclear abolition.

The resolution calling for “intensified efforts toward nuclear abolition” notes that Japan, “as the only nation to have suffered from atomic bombings, has a responsibility to lead the effort to eliminate nuclear weapons from the world.” The resolution also includes the view that non-nuclear weapons states, including Japan, should work together to rigorously promote the establishment of an effective inspection regime in response to such threats of nuclear proliferation as the dispersal of nuclear-related technologies and materials.

Referring to the new U.S. presidency of Barack Obama, who has pledged to pursue “a world without nuclear weapons,” and North Korea’s nuclear tests, the resolution demands that the Japanese government strive to strengthen the trend toward nuclear abolition. The resolution calls on the Japanese government to step up efforts toward nuclear disarmament and non-proliferation, specifically suggesting that the government take initiative at the Nuclear Non-proliferation Treaty (NPT) Review Conference next year and help realize the swift implementation of the Comprehensive Test Ban Treaty (CTBT).

The Democratic Party of Japan submitted a proposal for this resolution at an executive meeting of the Lower House Steering Committee in May, following Mr. Obama’s speech in Prague. The ruling and opposition parties have worked on the details of the proposal with the aim of presenting a unified parliamentary view. The proposal for the resolution was then jointly submitted to the plenary session of the House of Representatives by all parties. After the House of Representatives adopted the resolution, Japanese Prime Minister Taro Aso voiced conviction by saying, “The Japanese government will, with new resolve, strive to enhance the international nuclear disarmament and non-proliferation regime in order to ensure the security of Japan.”

A proposal for a similar resolution calling for nuclear abolition will be presented at the House of Councillors as soon as the ruling and opposition parties finish making adjustments to their draft proposal.